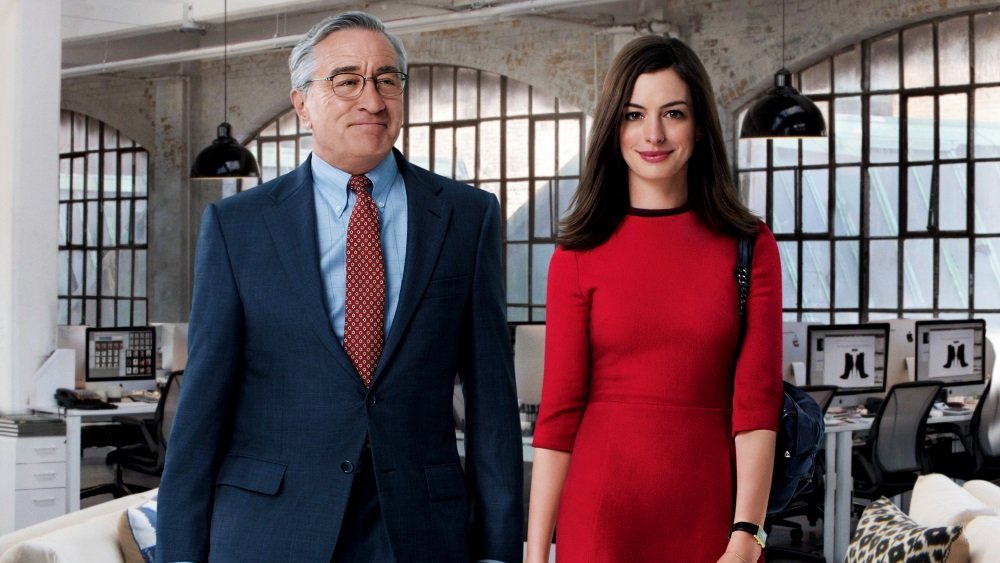 Straight Outta Compton dramatizes the origins and rise of N.W.A., the provocative hip-hop group that made stars of Ice Cube, Dr. Dre, and Eazy-E and launched gangsta rap. It’s a musical biopic in an urban warzone; filmmaker F. Gary Gray shows us the culture of gangs and drugs and violence that shaped the group’s angry message as well as the internal conflicts that tore the group apart as it was taking off. It was one of 2016’s unqualified hit movies and earned an Oscar nomination for its screenplay. Reviewed on Stream On Demand here. Rated R for language, nudity, violence, and drug use, and it’s also available on a longer director’s cut. Also on Blu-ray, DVD, and digital formats.

The Intern, with Anne Hathaway as a young entrepreneur balancing a growing company with family and Robert De Niro as her senior (as in senior citizen) intern, is the opposite of provocative. Written and directed by Nancy Meyers, this is a triumphant drama of a successful businesswoman as a comfort food movie. The generation gap bridged as the web-savvy kids of her internet clothing sale company learn a thing or two from the 70-year-old widower and career company man who just wants to keep himself engaged and useful. Which he does, devoting himself to supporting his boss while also finding (age appropriate) romance with the company’s resident masseuse (Rene Russo). There is nothing you can’t accomplish when Robert De Niro has your back. Also on disc and digital formats. PG-13.

Everest, based on a true story, puts Jason Clarke, Josh Brolin, Jake Gyllenhaal, and other A-list stars on the highest mountain peak in the world. Also available in 3D on some systems and on disc and digital formats. PG-13.

Also new: the acclaimed indie drama The Diary of a Teenage Girl with Alexander Skarsgard and Kristen Wiig (R), the LGBT-focused dramas Freeheld with Julianne Moore and Ellen Page (PG-13) and the misguided and critically hammered Stonewall from Roland Emmerich (R), and the faith-based sports drama Woodlawn with Sean Astin and Caleb Castille (PG).

Available same day as select theaters nationwide is the thriller Mojave with Oscar Isaac and Mark Wahlberg (R) and the science fiction picture Synchronicity with Chad McKnight (no rating).

Netflix is now streaming three of the five Oscar nominated documentaries. Cartel Land, a portrait of Mexican vigilante groups fighting back against the drug cartels co-produced by Vice (rated R), joins the preciously available What Happened, Miss Simone? and Winter on Fire.

The Cut (2014), from German filmmaker Fatih Akin, is the epic odyssey of a father’s journey from the Ottoman Empire, where he survives the Armenian Genocide, halfway around the world to find his daughters, who have also survived. Tahar Rahim (of A Prophet and The Past) is the father, a blacksmith left mute from the cut that was meant to kill him, and it’s co-written by Mardik Martin, who also co-wrote Mean Streets and Raging Bull with Martin Scorsese. In Armenian, Arabic, and English with subtitles. No rating.

With Joss Whedon’s short-lived but beloved series Firefly readily available, it’s about time that the feature film sequel Serenity (2005) is now streaming, providing the closest fans have to a finale. Reviewed on Stream On Demand here. PG-13.

Much less violent is the Hallmark Channel romantic drama When Calls the Heart: Season 2, set in a small town in rural Canada in the early 1900s.

The SyFy Original disaster movie spoof Sharknado 3: Oh Hell No! (2015) features Ian Zeiring, Tara Reid, and an all B-list cast. That’s not a recommendation, merely a warning. And for true gluttons for cheesy cinema punishment, Netflix has Sharknado (2013) and Sharknado 2: The Second One (2014).

The Amazon series Mad Dogs: Season 1, a remake of a British show, is a darkly comic show starring Michael Imperioli, Billy Zane, Steve Zahn, and Romany Malco as 40-something friends in big trouble in a foreign country. 10 episodes.

Sesame Street may have relocated to HBO but Amazon Prime subscribers can watch over 60 complete episodes from Seasons 36-40 (2005-2010).

Spare Parts tells the inspirational true story of a team of four Hispanic students in an underfunded high school to who take on MIT in a robotics competition. George Lopez and Marisa Tomei star. PG-13.

The Coen Bros. earned their first Oscar for Fargo (1996), their offbeat and unpredictable crime drama full of quirky humor, odd characters (a pregnant cop, a desperate, sad sack used car salesman, and the two shaggy, simple thugs he hires to kidnap his wife) and lilting speech patterns you’ll find yourself mimicking for days. They set their tale in their home state of Minnesota in the depths of winter, making for both a gorgeous and desolate setting and a unique setting for both moments of depraved violence and a sweet sensitivity to character. It’s rated R, dontcha know.

4:44 Last Day on Earth (2011) is Abel Ferrara’s end of the world film, is not a spectacle but a rumination. Willem Dafoe and Shanyn Leigh star as lovers who spend their last hours of existence secluded in their Manhattan apartment, finding themselves separated by technology or emotional anxiety and still losing themselves in TV or other distractions when they should be connecting. R.

Sesame Street has changed its address to HBO to launch its 46th season. New episodes arrive every Saturday morning and seasons 41-45 are available in their entirety on HBO Now, Go, and On Demand.

The Godfather Epic presents a new edition of Francis Ford Coppola’s 1977 chronological reworking of the first two “Godfather” films (with additional footage not seen in theaters) for TV. Released only in shortened form on home video, this is the full cannoli, restored and remastered for HD. Not rated but includes footage from R-rated films

The new 8-part documentary series Dark Net explores the dark side of technology and the hidden dimensions of the internet.

Drunk Stoned Brilliant Dead: The Story of the National Lampoon chronicles the rise and fall of the famed humor magazine.

19-2, a Canadian crime drama starring Adrian Holmes and Jared Keeso as Montreal police officers, makes its American debut on the streaming service. Two episodes now available, subsequent episodes roll out every Monday night. 10 episodes in all, with a second season debuting later in 2016.