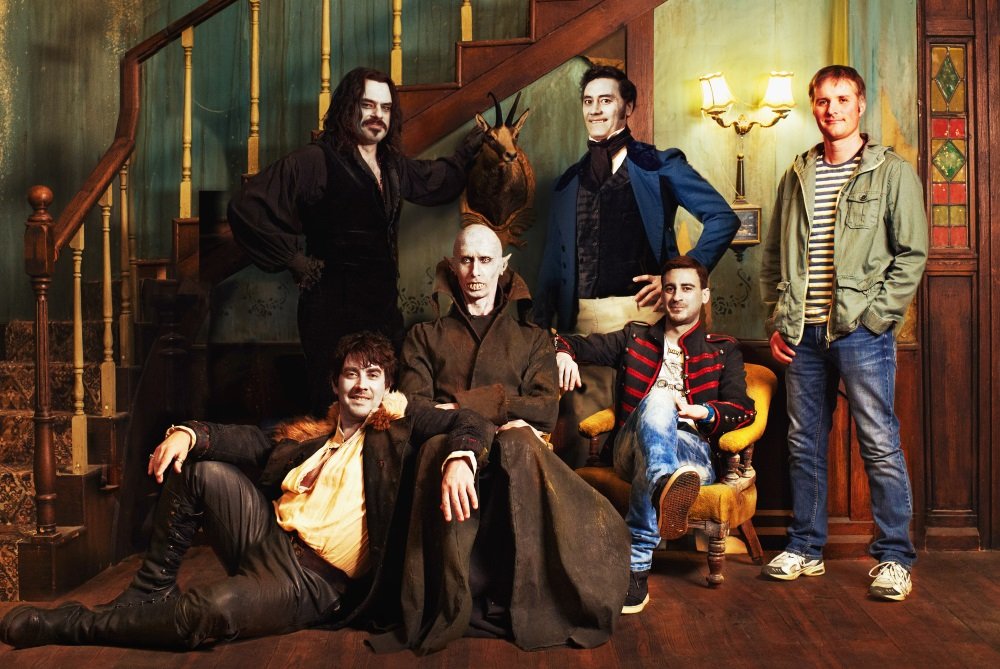 What We Do in the Shadows (2014) takes the mockumentary approach to the vampire film, though that hardly describes the deadpan absurdity of this comedy of ancient European vampires in New Zealand, who after centuries of unlife haven’t gotten any smarter.

It’s written and directed by Jemaine Clement and Taika Waititi, who previously collaborated on the films Eagle vs Shark (2007) and Boy (2010) and the TV show Flight of the Conchords, and they star as two of the four eternals living in a rundown house on the outskirts of Wellington where a camera crew (armed with crucifixes) has been invited to see how creatures of the night roll. The joke is that the so-called glamor of eternal life and supernatural power turns out to be a dull, mundane existence of petty squabbles, unfinished chores, and a nightlife that ends up in the same lifeless haunts. It’s tough when you can’t enter any domicile without an invitation and you are simply too uncool to be welcomed.

Clement, the biggest star of the otherwise unknown cast (at least to American audiences), gets the most flamboyant role as the Goth-styled veteran (he’s 800 year old) still getting by on tired party tricks and the delusion that he’s darkly attractive in his centuries-out-of-fashion get-up while Waititi (dolled up like an 18th century dandy and sporting a goofy smile) plays the guy trying to nudge them into action. Like doing the dishes that have been sitting in the sink for five years and being more careful about getting blood on the furniture.

They’re quite literally the roommates from Hell whose fiery passions have long been doused in boredom and triviality. The most excitement they can muster is baiting the local werewolf pack during their 12-Step meetings (led by Rhys Darby). Clement and Waititi bring the deadpan silliness of Flight of the Conchords to the pumped-up egos and deflated results of these toothless monsters, while they find an oddball sweetness to their dysfunctional camaraderie.

Clement has since developed a hilarious small-screen spin-off of the series for FX set in the U.S. This is the original that inspired that cult series.

Streaming free on Kanopy and on Hoopla, which are free through most public and college library systems.

and other services. Availability may vary by service.
What We Do in the Shadows [DVD]

What We Do in the Shadows [Blu-ray]