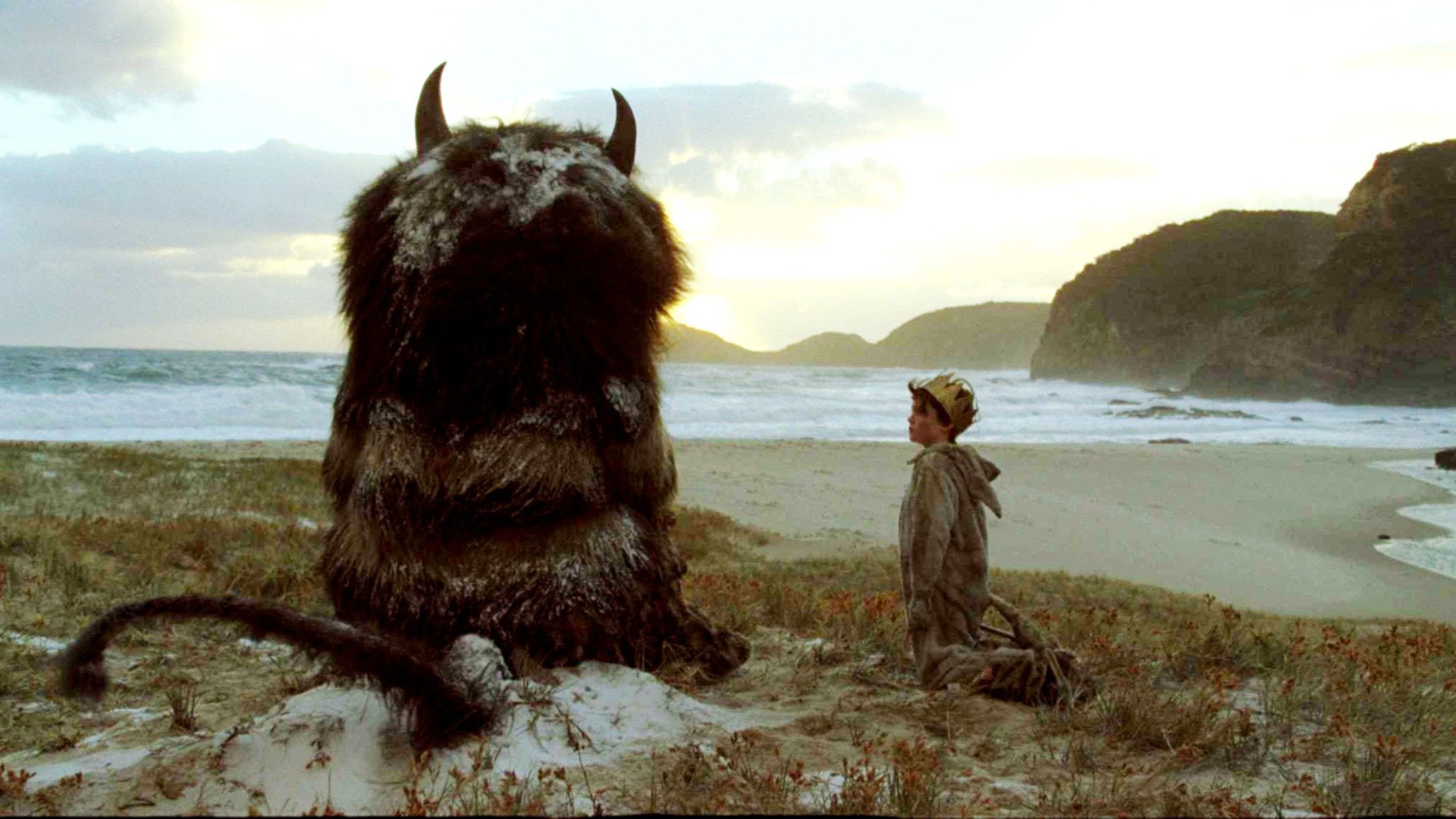 Maurice Sendak’s masterpiece of a picture book comes to the screen in Where the Wild Things Are (2009), a film as unique and heartfelt as the book itself. Director Spike Jonze (whose vision received the blessing of Sendak) and co-scripter Dave Eggars expand and reimagine the story of the defiant Max, a young boy in a tatty wolf costume, in the spirit of the feelings that drives that book.

Max is played by Max Records with an openness and responsiveness that makes him live every scene in the moment, and a vulnerability that makes his outbursts more poignant. Jonze captures touching moments of tenderness between mother (Catherine Keener) and son with the simplest of images—Max curled up under her desk, distractedly pulling at the toe of her nylon while telling here an impromptu story—which makes his emotional meltdown all the more wrenching and real. “I’ll eat you up,” he screams in a line right out of the book. Thus he flees to the island of the wild things, a landscape of craggy coasts and primal forests and sand dunes that is fantastical and primitive, and a population of amazing beasts, a tribe of hulking yet childlike monsters equal parts mythological creature and demented stuffed animal.

The imagination behind this film is tremendous but Jonze shoots the film with a naturalism, grounding the fantastical in the physical world, and the wild things (in magnificent suits created by Jim Henson’s Creature Shop with animated assists to the face and mouth) are just as solid and substantial as the rocks and trees and nest-like forts they crush with knock-about abandon. Voiced by the likes of James Gandolfini, Catherine O’Hara, Forest Whitaker and Chris Cooper, they are children in adult voices, eager to play and happy to make Max their king. But Max has left nothing behind as the fears and anxieties of his life are mirrored in his fantasy world. He may be king of the wild things, but he can’t control the emotions in the wild rumpus of this world of make-believe any more than he could back home.

Where the Wild Things Are is a film for the child within and I love it. There is no effort to whip up the furious action and noisy comic complications that thoroughly destroyed the live-action versions of the Dr. Seuss adaptations How the Grinch Stole Christmas and The Cat in the Hat. Jonze is respectful to the source (Sendak picked Jonze to direct the film and has given it his stamp of approval) and adds his own dimensions in the spirit of the original and a style all his own. It’s as honest a tale of being a child as you’ll find on screen, with all of the fantasy and reality and joy and anxiety of childhood grounded in the imagery and the landscapes of a tyke’s mind.

, iTunes, GooglePlay, Vudu and/or other services. Availability may vary by service.
Where the Wild Things Are [Blu-ray+DVD]]

Where the Wild Things Are [DVD]

The DVD features four behind-the-scenes featurettes by Lance Bangs (originally shown as webisodes). Exclusive to the Blu-ray edition are the original live-action adaptation of Sendak’s “Higgelty Piggelty Pop! or There Must Be More to Life” (a fantastic live action/animated storybook creation featuring Meryl Streep), the “HBO First Look: Where the Wild Things Are” making-of featurette and four additional webisode shorts. The Blu-ray edition also includes a bonus DVD copy.