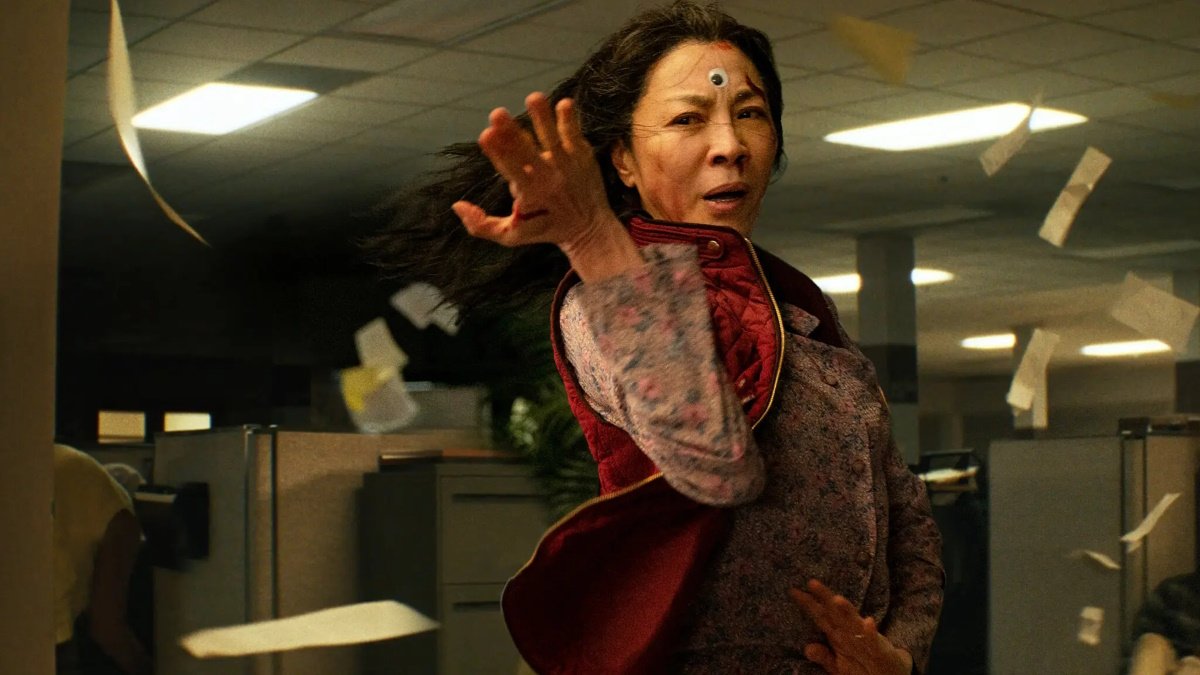 The 95th Academy Awards will be handed out on Sunday, March 12. Here’s your guide to getting caught up before the big day.

The full slate of ten films made the cut in the best picture category and at this time, most of those films are now available to see at home, either streaming on a service or video-on-demand rental. In fact, only two best picture nominees are still exclusively showing in theaters: James Cameron’s blockbuster action fantasy Avatar: The Way of Water, which earned four nominations in all, and Sarah Polley’s intimate drama Women Talking, also nominated for its screenplay adaptation.

The vast majority of nominated films, however, are already available to watch at home. Here’s an easy guide to what you can see and how you can see them.

The underdog hit of the year, Everything Everywhere All at Once, a wildly inventive mix of family drama, offbeat comedy, and multiverse odyssey, continues to surprise with eleven nominations, including nods for leading actress Michelle Yeoh, supporting actresses Jamie Lee Curtis and Stephanie Hsu, supporting actor Ke Huy Quan, original screenplay, and directors Daniel Kwan and Daniel Scheinert. It streams on Showtime Anytime and is available to purchase on disc or digital formats.

Martin McDonagh’s The Banshees of Inisherin, a dark comedy of a breakup between two longtime friends, earned nine nominations, honoring the original screenplay and direction by McDonagh and actors Colin Farrell, Brendan Gleeson, Barry Keoghan, and Kerry Condon among other nominations. Streaming on HBO Max and on VOD.

Also scoring nine nominations is All Quiet on the Western Front, the German adaptation of Erich Maria Remarque’s harrowing World War I novel. It picked up nominations for international feature, cinematography, adapted screenplay, and numerous technical and craft awards. It streams exclusively on Netflix.

Elvis, Baz Luhrmann’s splashy take on the life and career of the rock and roll legend, earned eight nominations, including one for newcomer Austin Butler for best actor. On HBO Max and VOD.

Steven Spielberg’s autobiographical drama The Fabelmans (seven nominations) also earned nods for director, actress Michelle Williams, and the original screenplay by Spielberg and Tony Kushner. Currently available only as a digital purchase, coming to VOD and DVD on February 14.

Here’s where you can find other nominated films (organized by streaming service).

Rian Johnson picked of a nomination for his screenplay to his clever Glass Onion: A Knives Out Mystery and Ana de Armas was nominated for her performance as Marilyn Monroe in the NC-17-rated Blonde.

Guillermo del Toro’s Pinocchio and The Sea Beast are both in the running for best animated feature, while Bardo: False Chronicle of a Handful of Truths (Mexico) earned a nod for its cinematography and the hit historical action musical RRR (India) received a nod for best song.

You can also stream documentary short nominees The Elephant Whisperers and The Martha Mitchell Effect.

Navalny was recognized in the best documentary category and the superhero reboot The Batman earned nominations for visual effects, sound, and make-up.

Argentina, 1985 (Argentina) is up for best international film.

“Turning Red“ chocked up a nomination in the animated feature category, Fire of Love is up for documentary, and Le Pupille earned a nod for live action short.

The drama Causewayearned a nod supporting actor nominee Brian Tyree Henry and The Boy, the Mole, the Fox and the Horse is an animated short nominee.

Andrea Riseborough was recognized in the best actress category for To Leslie and Paul Mescal earned a best actor nod for Aftersun. And don’t count out the sweet Marcel the Shell with Shoes On which is up for animated feature.

All Quiet on the Western Front, Amazon Prime Video, Disney+, Everything Everywhere All At Once, HBO Max, Netflix, Paramount+, Showtime Anytime, The Banshees of Inisherin, VOD