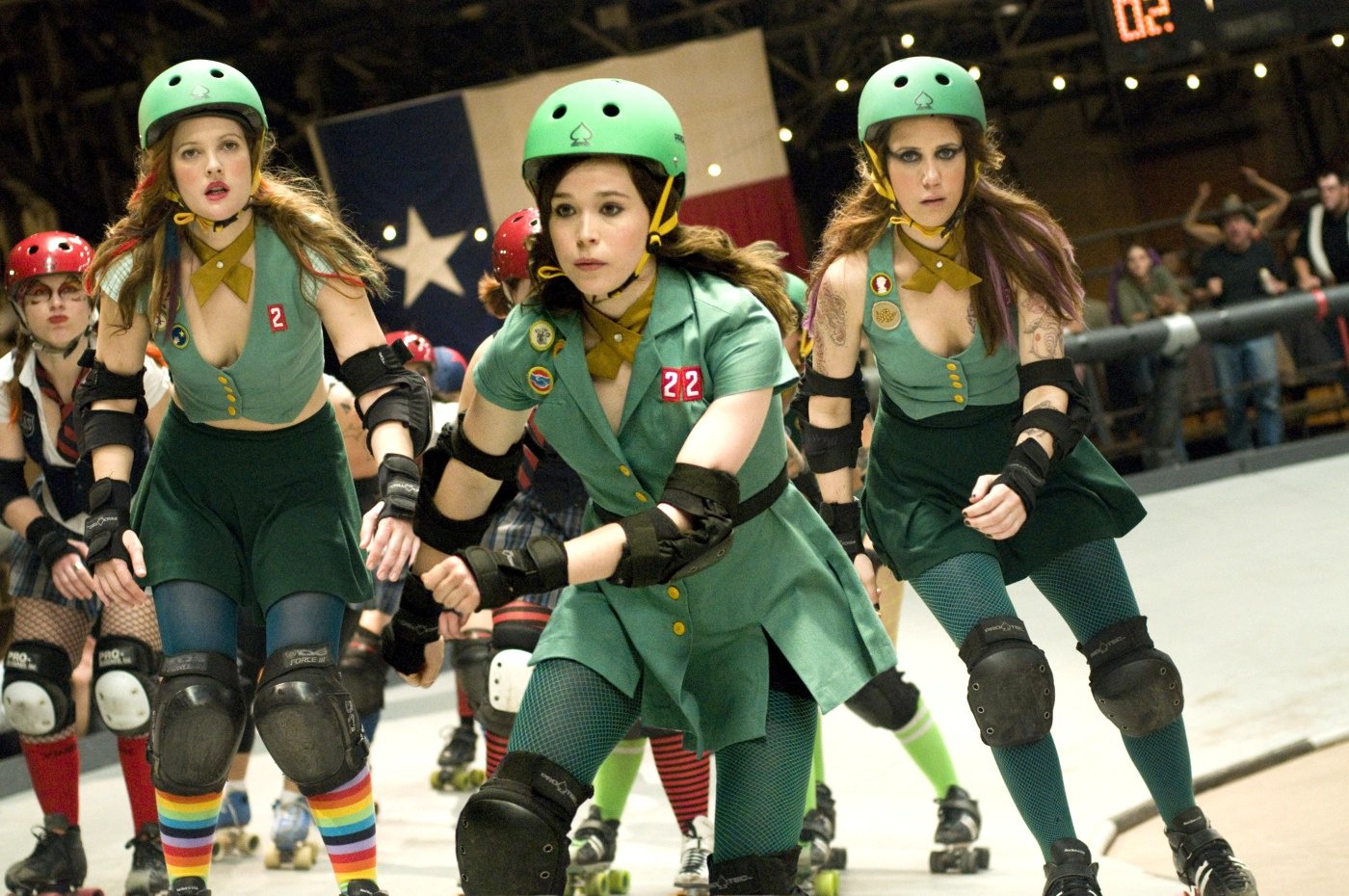 Whip It (2009), the directorial debut of Drew Barrymore, is a grrrl power movie on wheels.

Set in the funky DIY world of local roller derby leagues, it stars Elliot Page in their best role since Juno. Bliss Cavendar is neither as smart-ass nor as confident as the sardonic Juno MacGuff. This restless girl in a Texas suburb of a suburb who rebels against the Young Miss Beauty pageants that her mother (Marcia Gay Harden) pushes her into after discovering her calling on the derby track in the nearby hipster metropolis of Austin. She lies about her age to join fan favorites and perennial losers the Hurl Scouts and finds sisterhood with the likes of team mother hen Maggie Mayhem (Kristen Wiig, sublimely down-to-earth both on and off the track) and scrappy wild child sweetheart Smashley Simpson (Barrymore herself).

Director Barrymore doesn’t throw any elbows into the familiar formula in her directorial debut. It’s a coming of age tale, to be sure, with familiar life lessons about trust and truth and boys and family rolled out between the body checks of bruising bouts, but it’s also about self-empowerment and self-image and the recognition of others on the road to discovering yourself. Barrymore, directing from a semi-autobiographical book adapted to the screen by its author, Shauna Cross, embraces the self-expression of this riot grrrl-style roller derby tale and fills the film with team spirit and high energy.

What’s most exhilarating about Whip It isn’t the speed demon thrills, however. It’s the inclusiveness and the respect the film gives these women. This is a film set in working class America, a reality that the movies so rarely show anymore, and apart from Bliss, they are all grown women in low-wage jobs who have found something in the sport that they can call their own. While we only get glimpses of their lives outside of the track, the few shots of Marcia Gay Harden doing her mail route speaks volumes about the realities of all of their lives.

Putting on the skates and pads, donning the helmets, they become characters of their own making—Bloody Holly, Rosa Sparks, Eva Destruction, whatever—and put their all into the track and the team. The attraction and the thrill they get is more than simple adrenaline and it is contagious.

Also on Blu-ray and DVD and on SVOD through Amazon Video, iTunes, GooglePlay, Fandango, Vudu and/or other services. Availability may vary by service.
Whip It [Blu-ray]
Whip It [DVD]

The Blu-ray and DVD feature 16 minutes of deleted and extended scenes, including an alternate opening with Ellen Page and additional scenes with Razor (Andrew Wilson) quitting the team. The Blu-ray includes an additional featurette.