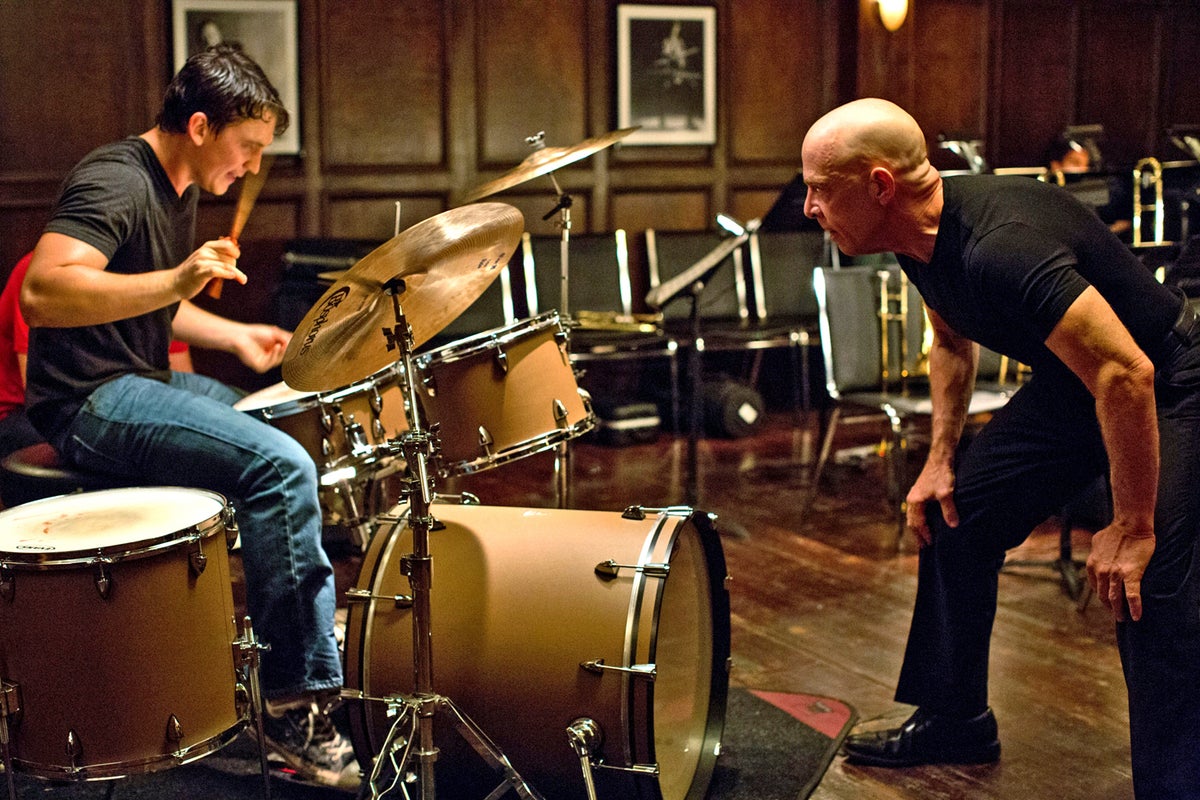 In Whiplash (2014), music is a competitive bloodsport.

Miles Teller is the ostensible star as percussionist Andrew, an intense and driven Buddy Rich disciple who lands a coveted spot in a prestigious music academy, but it’s J.K. Simmons who everyone remembers.

He’s Fletcher, an instructor as feared as he is respected. Think of him as the drill sergeant of Full Metal Jacket in a simple black t-shirt and slacks and head shaved to a hard sheen, and his boot camp is the school’s competition stage band, where the best of the best compete for seats. He bullies his students into total obedience and they are desperate to win his approval while he browbeats, humiliates, and even physically assaults them, none more so than Andrew.

Teller is as fearless as Simmons, an obsessive who become insufferably arrogant and self-absorbed in his zeal for perfection. Likable he’s not but he is compelling, taking the sports ethos of pushing past the pain to reach perfection. He literally bleeds for his art. Fletcher demands even more through his hyena smile. He may actually believe that such tactics make better musicians (that which doesn’t kill only makes you a stronger player?) but he clearly enjoys the mind-games and emotional warfare. Simmons gives him life by playing it with cagey calculation, as if the very act of teaching is a competitive event.

This is as much psychological thriller as musical drama and it turns on the increasingly toxic chemistry between two clearly damaged people, to the exclusion of pretty much anyone else in the film. As a result it slips out of the real world and into a stylized arena of musical warfare, but it works in the scheme of things.

Writer / director Damien Chazelle has basically created a two-hander and that collision of ruthless ambition and ferocious control is riveting. The jazz band pieces, especially the title song “Whiplash,” give the film a brittle edge; these tunes aren’t played to express musical joy, they are designed to showcase musical precision, and the percussion-heavy element puts the film on edge as successfully as the drum solos in Birdman define the nervous tension of that film.

And, of course, Damien Chazelle went on to win his own Oscar in his follow-up feature, La La Land.

Also on Blu-ray and DVD and on SVOD through Amazon Video, iTunes, GooglePlay, Vudu and/or other services. Availability may vary by service.
Whiplash [Blu-ray]
Whiplash [DVD]
Whiplash [4K UHD + Blu-ray]

Blu-ray and DVD both feature commentary by filmmaker Damien Chazelle and co-star J.K. Simmons and a Q&A from the Toronto Film Festival screening with Chazelle, Simmons, and Miles Teller. Exclusive to the Blu-ray is the original short film Chazelle shot with Simmons to help fund the film (Simmons’ son plays the role that Teller essays in the feature), the 40-minute drumming documentary “Timekeepers,” and a deleted scene, plus an Ultraviolet Digital HD copy of the film. Also on Digital HD and cable and web VOD.