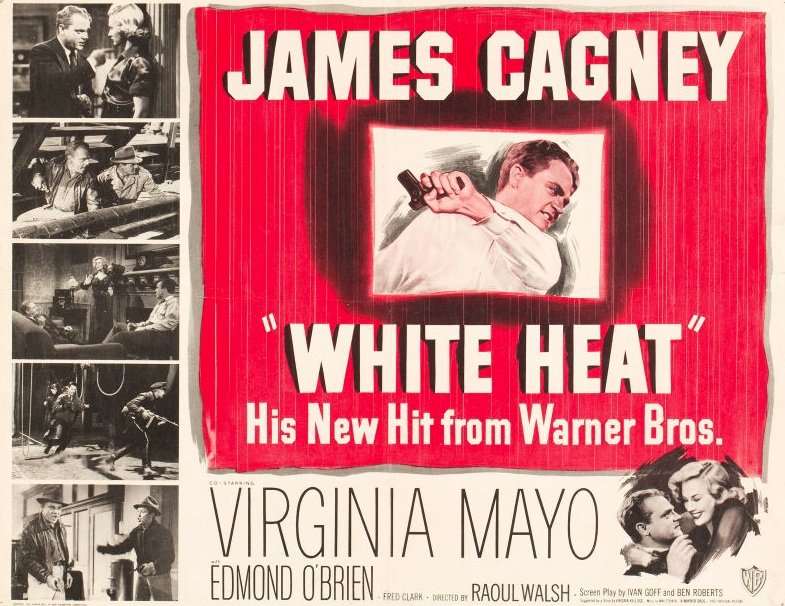 One of the greatest gangster classics of all time, White Heat (1949) stars James Cagney in an explosive performance as psychotic career criminal Cody Jarrett, driven over the edge by blinding headaches and murderous rages that only his mother can calm. Until, that is, she’s murdered while he’s in prison, sending him on a bloody rampage of revenge.

As directed by Raoul Walsh, it’s absolutely ferocious and Cagney gives a blindingly unhinged performance as an emotionally unstable and mentally unbalanced Jarrett, putting his dancer’s moves to work in a riveting physical performance. Jarrett is not so much the flip side of Tom Powers as the ultimate distillation of his rage into a vicious purity. Where the young Public Enemy burst with nervous energy and feral ambition, Jarrett explodes with uncontrollable fury, and his blinding headaches and ferocious tantrums are as much symptoms of his sickness as the inevitable reward for a morally diseased life. Jarrett’s only redeeming quality is his unconditional devotion to his mother, and even that turns disturbingly Oedipal when we see the grown killer curling up on mommy’s lap like a naughty kid.

Virginia Mayo is perfectly tawdry as Jarrett’s cheating wife, Steve Cochran is the muscle who muscles in on Mayo, and Edmond O’Brien is the agent who goes undercover to get Jarrett, while Cagney indeed burns white hot right to the incendiary ending.

B&W, not rated. Give it E for explosive.

, iTunes, GooglePlay and/or other services. Availability may vary by service.
White Heat [Blu-ray]

On Blu-ray and DVD from Warner Bros. with commentary by film historian Drew Casper, the documentary featurette “White Heat: Top of the World,” and “Warner Night at the Movies 1949,” a program hosted by Leonard Maltin with the comedy short So You Think You’re Not Guilty, the cartoon Homeless Hare, a 1949 newsreel, and a gallery of 1949 trailers.