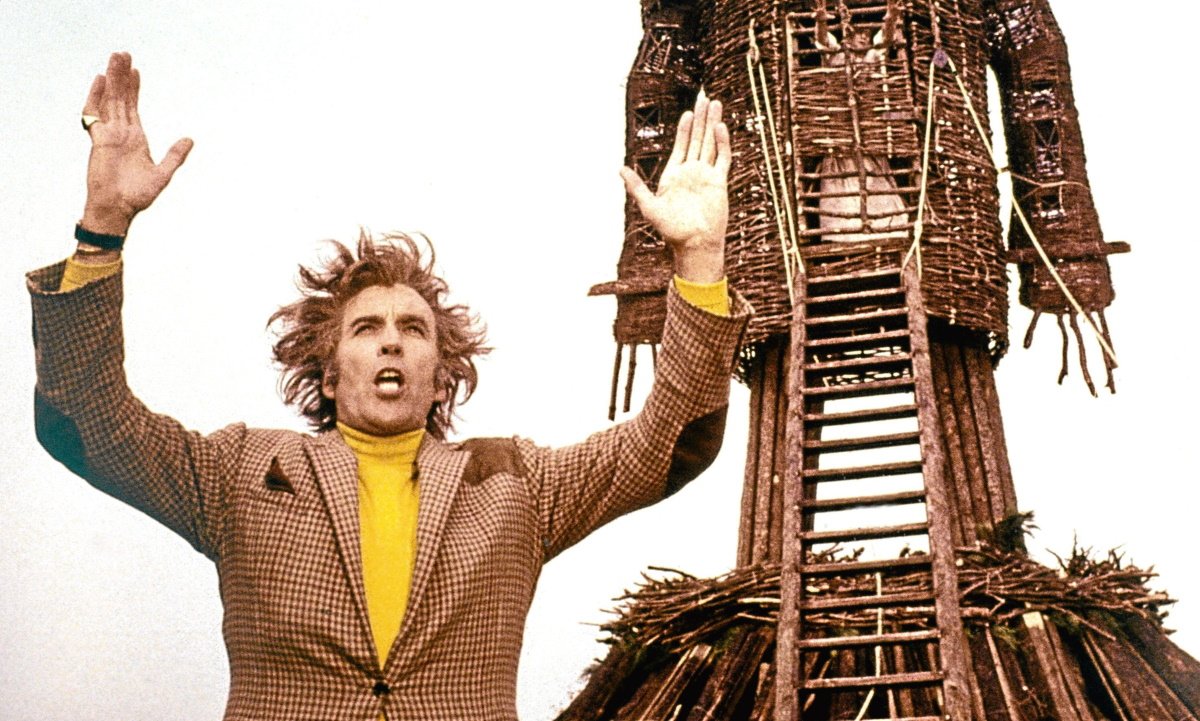 The original The Wicker Man (1973) begins as a murder mystery and turns into something else entirely.

Edward Woodward stars as the stiff English police detective who is sent to a remote Scottish island to investigate the disappearance of a young girl and discovers a culture living a happy “heathen” lifestyle, lorded over (literally) by an eccentric nobleman (the great Christopher Lee). Villagers sing suggestive songs in the pub and their folk songs and fertility dances have an earthy frankness and the detective even finds locals having sex in the local cemetery. They worship the old gods. He demands, “What of the true God?”

He is, to put it mildly, appalled.

The little island community plays on the repressed Protestant cop’s hysteria with suspicious evasions and wild, rapacious ceremonies. Britt Ekland plays a sexy villager who dances a famous nude hoochie-koochie (with some help from a body double) to seduce the virginal straight arrow cop, which only steels his resolve to rip the lid off this abomination of society. Finally he becomes convinced that the missing girl has been abducted to become an ungodly sacrifice in their May Day rites.

Written by Anthony Shaffer (fresh off writing Sleuth), this is one of the most smartly scripted tales of paganism put to screen, and not just because due to Shaffer’s respect of and sensitivity to the ancient beliefs. Director Robin Hardy creates an uneasy atmosphere, filling in the sunny island paradise with sensuous imagery and drawing attention to the phallic symbols, while presenting the Mother Earth worship with sincerity. And the film builds to a brilliant climax that does indeed involve the wicker man of the title.

In interviews throughout his life, Christopher Lee insisted this is the best film he ever made.

, iTunes, GooglePlay, Fandango, Vudu and/or other services. Availability may vary by service.
The Wicker Man: The Final Cut (Lionsgate) [Blu-ray]

The film has been released in numerous editions at various lengths: the original 88 minute theatrical version, a “restored” 102 minute director’s cut (filled out with footage taken from an inferior workprint), and a 92-minute version that Hardy prepared for the American release but was shelved and discovered in the vault decades later. Lionsgate presents the latter, which it calls “The Final Cut,” on Blu-ray. Anchor Bay released the 88-minute cut on DVD with the documentary featurette “The Wicker Man Enigma” and the rare 102-minute cut in a 2-disc special edition with the 88-minute release version.