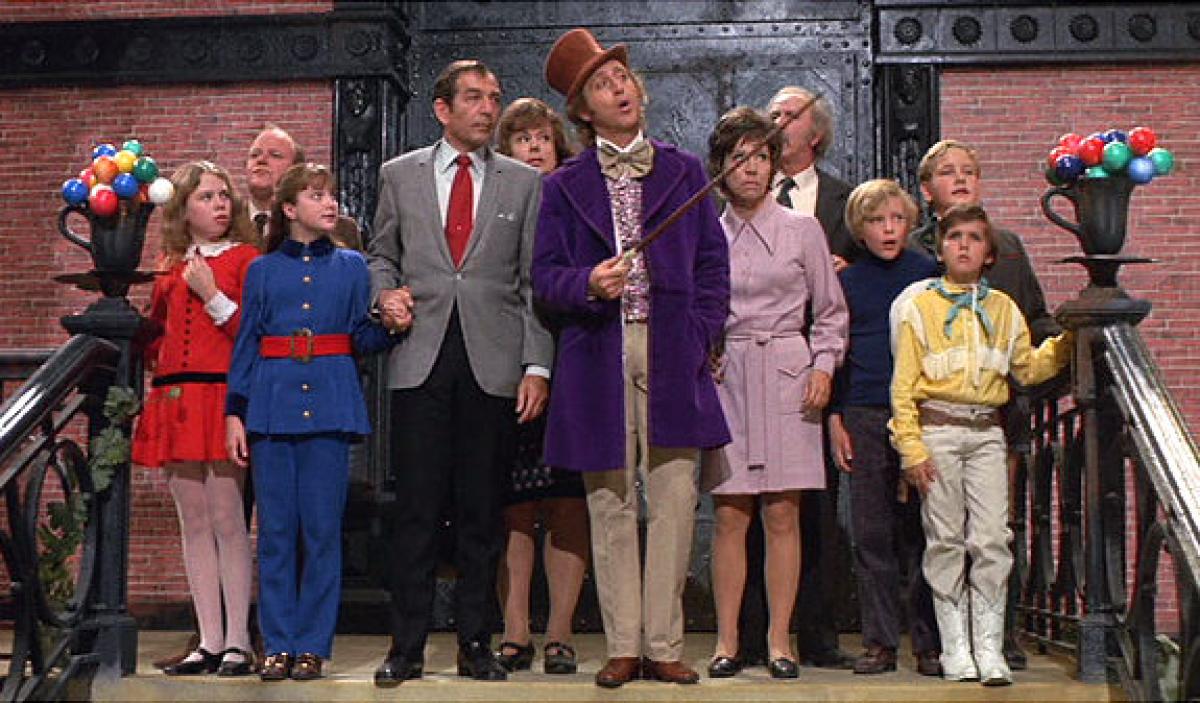 “Come with me and you’ll be in a world of pure imagination.”

Gene Wilder is the weird, wonderful, slightly sinister candy bar king who invites five children into his factory kingdom in Willy Wonka and the Chocolate Factory (1971), a musical adaptation of Roald Dahl’s children’s fantasy. It is a rare breed: an imaginative live-action kid’s film that engages and delights adults.

Peter Ostrom is Charlie, the son of a widowed, overworked washerwoman living in poverty with bedridden grandparents in a hovel right out of a Dickens novel. It sounds miserable but there is plenty of love and cheer in the house, which gives Charlie room to hope that he can win one of the Golden Tickets that would usher him into the fabled candy kingdom that stands out of this grimy city that exists somewhere between the modern world and a 19th century factory town. The pure imagination of the world inside the factory is an escape from the dreary reality of soot-covered town, and by extension the taste of a Wonka bar is a little piece of paradise.

For all the wonder of a film, with its bouncy, silly songs, art design in candy colors, and mix of innocence and strangeness, there is also an edge to Wilder’s simultaneously weird and warm eccentricities, like a mix of storybook fantasy and Grimm Fairy tale updated to the industrial world of the twentieth century, and to his sugar-rush fantasy factory. There’s a chocolate river (Wonka chocolate is famously churned by waterfall), flowers with hard-candy petals, and jelly beans growing like wild berries, but things get a little darker in the experimental section. The fizzy pop that makes Charlie and granddad float like a bubble also sends them up into the rotating blades of a vent, and that Three-Course-Dinner-Gum has a doozy of a side effect: it plumps up little gum-smacking Violet Beauregarde into a roly-poly human blueberry when she gets to dessert. In this case you really are what you eat. Or at least what you chew.

Tim Burton and Johnny Depp have tried their hand at adapting Roald Dahl’s classic fantasy but even Burton’s madcap imagination can’t match the perfect balance that director Mel Stuart (a major documentarian of the sixties and seventies) and Dahl (who adapts his own book) bring to the production, and Depp fails to bring the mix of mystery and magic and dark and light of Wilder’s knowing incarnation.

It earned an Oscar nomination for the original score and songs by Leslie Bricusse, Anthony Newley, and Walter Scharf.

The Blu-ray and DVD editions include the half-hour “Pure Imagination” and the original 1971 promotional featurette, but the real treat is a reunion commentary track with the five grown-up Wonka kids: Julie Dawn Cole, Denise Nickerson, Paris Themmen, Michael Bollner, and Ostrum, all watching the film together for the first time in almost 30 years. Their stories and remembrances are quite fun and the in-jokes are endearing because they help them recapture the sheer joy of being kids on the set. They josh and rib one another, the girls revisit their childhood crush on Peter Ostrom, and they all recall that Paris (Mike Teevee) “was a pain.” “And paid very well to be one,” he tosses back.

The “40th Anniversary Blu-ray+DVD Ultimate Collector’s Edition” adds an interview featurette with director Mel Stuart (12 minutes) that features new interview snippets with his children (who had bit parts in the movie) and two of grown child actors from the film, and the archival featurette “A World of Pure Imagination,” an extended promotional piece includes some priceless behind-the-scenes footage, including composers Anthony Newley and Leslie Bricusse performing bits from the score and an interview with Roald Dahl along with a peek at his home and family.