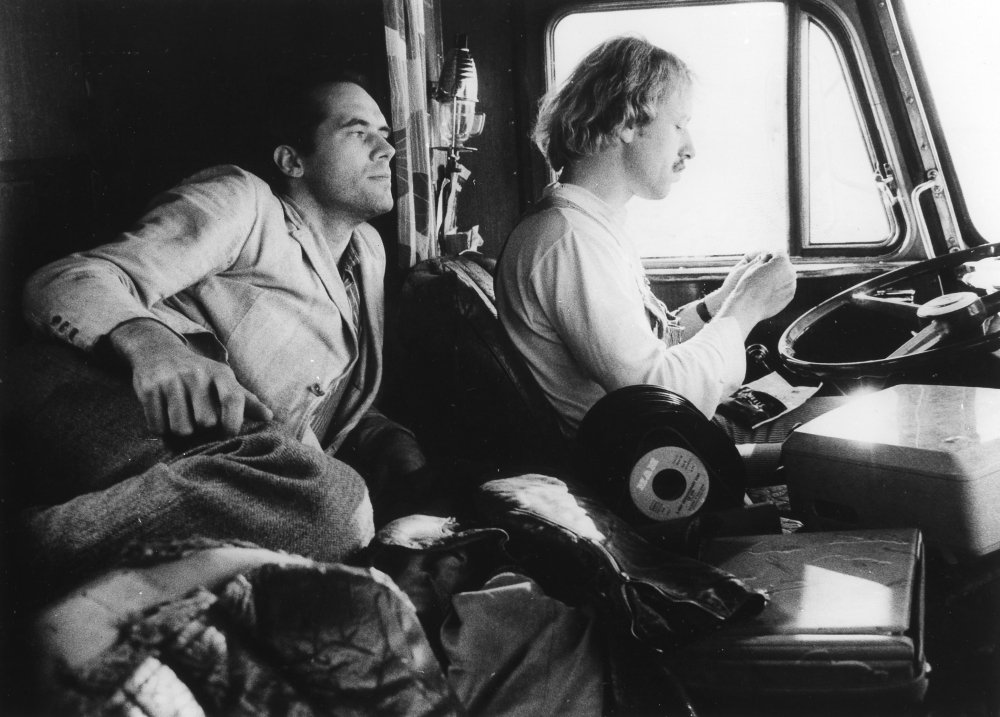 Wim Wenders was never exactly a household name but the German filmmaker made a reputation as a thoughtful, sensitive director of stories about wanderers, travelers, and outsiders whose journeys are both an escape and a road back. His American odyssey Paris, Texas (1984) and Wings of Desire (1987), a journey of a celestial being from ethereal observation to human experience, brought him international acclaim.

The roots of these films can be found in a trilogy of road movies he made a decade ago, all starring Rudiger Volger (his onscreen alter ego) on journeys across Germany, searching for both personal and national identity.

Alice in the Cities (Germany, 1974), starring Volger as a photojournalist returning to Germany from a journey across America and young Yella Rottlander as a girl left in his care by her single mother (Lisa Kreuzer), is Wenders’ fourth feature and his initial international breakthrough. When her mother fails to show at their meeting place, he takes the girl on a road trip through the Ruhr region to find her grandparents. It is pure Wenders: observations of the world from the unrooted, full of off-center cultural observations and gently human encounters. The black and white film is photographed by Robby Muller, who shoots all three films and captures the easy, meandering pace and observational style that defines the entire trilogy.

Wrong Move (Germany, 1975), inspired by a Goethe novel and scripted by German novelist Peter Handke, is the most overtly literary of the three films (the characters tend to speak in quotations marks) and the most dour. Volger is an alienated, self-involved would-be writer who goes traveling to find something to write about and gathers a temporary group of lost and lonely souls around him (including Hanna Schygulla and Nastassja Kinski in her first screen role).

I nominate the road movie epic Kings of the Road (Germany, 1976) as Wenders’ first true masterpiece. Volger is Bruno, a movie projector repairman who visits small town cinemas near the East German border, and Hanns Zischler is Robert, an aimless child psychologist reeling from a recent divorce who becomes his traveling companion after driving his car into a lake. The two strangers fall into an easy companionship, rarely conversing but connecting over American music and unspoken jokes and sharing a kind of arrested adolescence as they embrace a gypsy life where no commitment is necessary. They make brief connections along the way before moving on to the next town until, as one of them observes, “Everything must change.”

Almost three hours long, Kings of the Road rolls along with a gentle serenity and contemplative tone interspersed with the dramas of people they meet along the way. Wenders and his cinematographer Muller find a lonely grace and beauty in the austere landscape of the countryside close to the border of East Germany. It won the FIPRESCI Prize (handed out by a jury of international film critics) at the Cannes Film Festival.

While these are not sequels, they are united by the theme of searching for identity in 1970s Germany (where the legacy of the Nazi past is suppressed but echoes through films), the road movie structure, and the casting of Volger in the lead as the traveler taking the first steps from aimless wandering to focused action, from disconnection to friendship, responsibility, and a renewed sense of self and hope. This trilogy established Wenders as a major filmmaker of the New German Cinema.

Not rated, Wrong Move is in color, Alice and Kings are in black and white.

All in German with subtitles.

Add to My List: Alice in the Cities, Wrong Move, Kings of the Road

, Kings of the Road

), iTunes, GooglePlay, Fandango, Vudu and/or other services. Availability may vary by service.
Wim Wenders: The Road Trilogy (Alice in the Cities/Wrong Move/Kings of the Road) (The Criterion Collection) [Blu-ray]

Wim Wenders: The Road Trilogy (Alice in the Cities/Wrong Move/Kings of the Road) (The Criterion Collection) [DVD]

All three films have been newly restored and feature a new subtitle translation by Wenders. On Blu-ray and DVD from Criterion with filmmaker commentary on each film, new interviews with Wenders and actors Rudiger Volger, Hanns Zischler, and Lisa Kreuzer, Wenders’ short films Same Player Shoots Again (1967) and Silver City Revisited (1968), a restoration featurette, outtakes, and behind-the-scenes footage, plus a booklet with new essays.