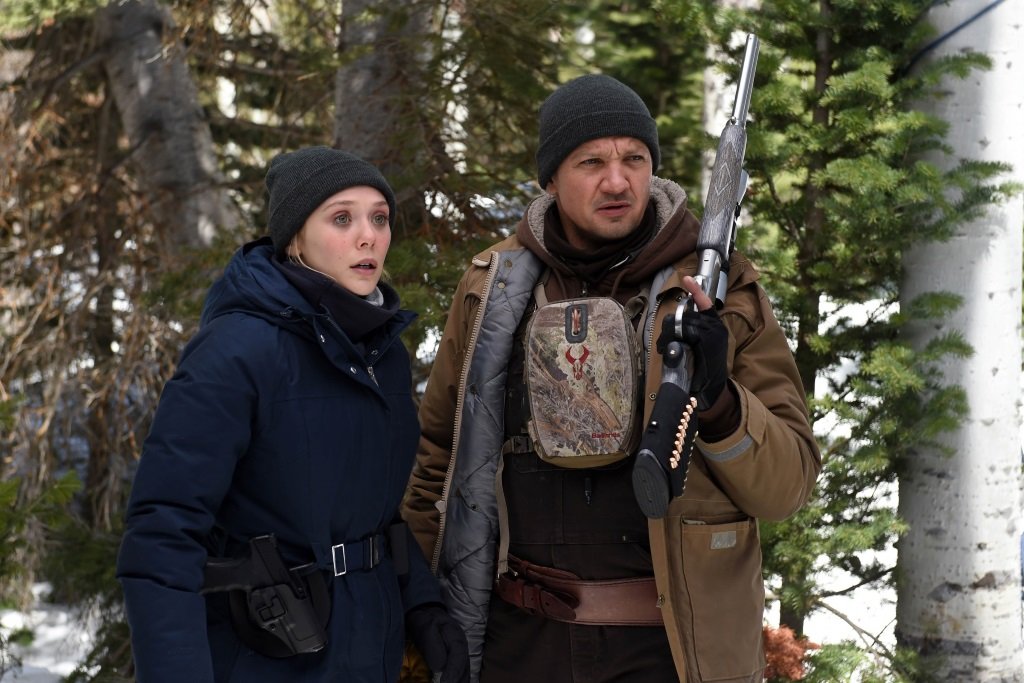 Wind River (2017) isn’t actually the directorial debut of Taylor Sheridan, the Oscar-nominated screenwriter of Siccario and Hell And High Water, but it may as well be. It most certainly is his film (unlike his forgotten 2011 horror film, Vile) and, like his earlier screenplays, a drama of frontier justice in the modern world (when legal justice doesn’t work).

Jeremy Renner stars as Cory Lambert, a hunter and tracker for Fish and Wildlife in Wyoming and a single father raising his daughter to be responsible, self-sufficient, and proud of her Native American heritage (on her mother’s side). Cory is the taciturn man of the west, at ease with the citizens of the nearby Wind River reservation even if he’s not one of them, and he takes it personally when he discovers the body of a dead girl from the reservation community.

The FBI sends in a green agent (Elizabeth Olsen) who happens to be nearby at a conference and Cory appoints himself her guide, tracker, and interpreter, so to speak. He knows the culture and the people, and he’s apparently the only one equipped to track the girl’s trail over the mountain. She died of exposure but what drove her to flee through the mountains in the dead of winter in bare feet?

Wind River is set against the harsh beauty of the snow-covered forests, scrubby plains, and rugged mountains of Wyoming, with locations accessible only by snowmobile and snowshoe. But the background is also the poverty and hopelessness of life on the reservation, the pervasiveness of violence against Native American women, and the sense of male guilt of the resolute, self-sufficient father who failed to protect his own in the past. He’s not about to let another death go unpunished.

This is a distinctively male world, where Olsen’s FBI agent is the only woman of any agency and is still dependent on the men around her. And for a film set on an Native American reservation, it presents a drama where two white characters from the outside arrive to deliver justice. While that could be an interesting dynamic in a story that pushes and pulls at tensions between the reservation residents and the white population off the rez, Sheridan doesn’t really explore that dimension.

Given that caveat, Wind River is both a lean, stripped down crime thriller and a muscular backwoods adventure, linear and fairly straightforward and, oddly, perhaps a little too talky when it comes to motivations and revelations. But Sheridan gives the film a vivid sense of place and culture, a modern frontier where justice becomes personal, and he takes on the many forms of grief. Renner’s Cory has pushed his down under his stoic front but the raw emotion of Martin (Gil Birmingham) and Alice (Tantoo Cardinal), parents of the murdered girl, is devastating. That vulnerability behind the leathery front provides the beating heart of this tough, frontier drama.

, iTunes, GooglePlay and/or other services. Availability may vary by service.
Wind River [Blu-ray]

The DVD and Blu-ray from Lionsgate features deleted scenes and an animated gallery of behind-the-scenes stills. The Blu-ray also includes an Ultraviolet Digital HD copy of the film.