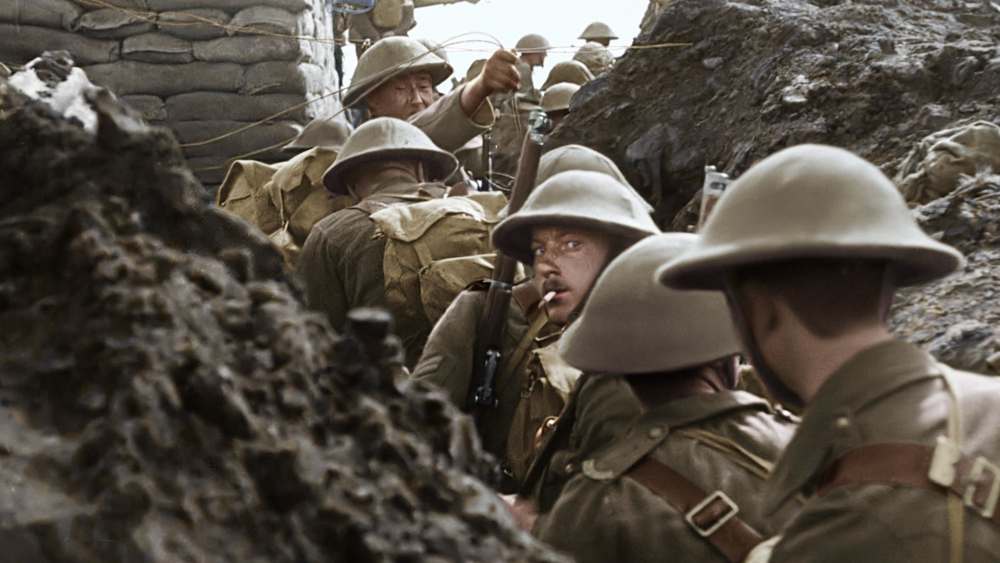 Peter Jackson brings history to life in They Shall Not Grow Old (2018, R), a documentary on the experience of British soldiers in World War I created entirely from archival footage and interviews. The film, which uses state-of-the-art digital effects to restore damaged film footage, was a hit on special event screenings and eventually earned a brief, successful theatrical run. Jackson’s transformation of the footage is incredible and the soundtrack of World War I veteran interviews is compelling. On Cable On Demand and VOD.

Amy Poehler directs and stars in the comedy Wine Country (2019, not rated) with Maya Rudolph and Tina Fey, playing longtime friends on a weekend getaway where tensions flare. “The scripted lines rarely zing, sing or sting (some seem improvised), but when the performers fall down or screw up their faces, you get to watch them fill in their characters with something like real feeling…,” writes Manohla Dargis for The New York Times. It debuts directly to Netflix.

Science fiction epic The Wandering Earth (China, 2019, not rated, with subtitles), based on a story by Cixin Liu (“The Three Body Problem”), was barely released in the U.S. but became one of the biggest blockbuster hits around the world. It’s now streaming on Netflix.

Chernobyl (2019) dramatizes the 1986 USSR nuclear disaster and its aftermath. Jared Harris, Stellan Skarsgard, and Emily Watson star. The five-episode miniseries plays on HBO and all streaming services, with new episodes each Monday.

Rosamund Pike and Chris O’Dowd star in State of the Union, a marital comedy with a serious undercurrent from director Stephen Frears and writer Nick Hornby that plays out in 10-minute episodes. New episodes each weekday on Sundance TV and Sundance Now.

Classic pick: Michael Caine is ruthless as the cockney thug out for revenge in Get Carter (1971, R), a hard-edged thriller that made British crime cinema cool again. On Netflix.

The LEGO Movie 2: The Second Part (2019, PG) animates the world of interlocking toys for a new adventure. Also new:

Available same day as select theaters nationwide is Her Smell (2019, R) with Elizabeth Moss as a self-destructive punk rocker attempting a comeback and The Professor and the Madman (2019, not rated), an historical drama about compiling the first Oxford dictionary starring Mel Gibson and Sean Penn.

Along with its signature original series, Netflix has picked up network shows with devoted followings that were cancelled. Lucifer: Season 4 with Tom Ellis as the ruler of Hell now solving crimes in Los Angeles with a police detective (Lauren German), is their latest rescue and the new season opens with his partner now aware of his true identity.

John Carter (2012, PG-13) was a financial flop but this adaptation of the Edgar Rice Burroughs series is actually quite entertaining.

More streaming TV: The Society: Season 1 follows a group of New England teens in a world without adults. Also new:

Foreign language TV: in the romantic fantasy Abyss: Season 1 (South Korea, with subtitles), a man and a woman are given a second chance at life in new bodies. Also new is the miniseries Crime Diaries: Night Out (Mexico, 2019, with subtitles).

Rosamund Pike plays real-life war correspondent Marie Colvin in A Private War (2018, R), which dramatizes her efforts to cover the most dangerous conflicts in the world.

True stories: Somm: Into the Bottle (2016, not rated) delves into the history and culture of winemaking. Also new: The Tillman Story (2010, R) profiles NFL star Pat Tillman, whose death serving in Afghanistan was misrepresented by the U.S. Government.

A family faces the evil within in The Clovehitch Killer (2018, not rated), a horror film with Dylan McDermott and Charlie Plummer.

The documentary Foster (2019, not rated) explores the foster care system in America, both its successes and failures, while celebrating the people who try to do good in an often impersonal system.

Boyd Holbrook and Keegan-Michael Key star in the science fiction thriller The Predator (2018, R), another sequel about the alien trophy hunters who use Earth as their game preserve.

The four-part documentary series Wu Tang Clan: Of Mics and Men is now streaming in its entirely.

Made-for-BBC film Mother’s Day (2018, not rated), starring Anna Maxwell Martin and Vicky McClure as mothers who reach across the border to protest the terrorist violence over the Irish independence fight, debuts on Britbox.

The Criterion Channel celebrates “George Cukor’s Women” with 10 films, from the all-star Dinner at Eight (1933) and The Women (1939) to lesser-known greats What Price Hollywood? (1932) and Sylvia Scarlett (1935) to his Hitchcockian classic Gaslight (1944) with Ingrid Bergman. Exclusive to this presentation is an archival interview with Cukor conducted by Peter Bogdanovich.

The recently added film noir masterpieces The Night of the Hunter (1955) and In a Lonely Place (1950) are presented with commentary, featurettes, and other revealing supplements from the special edition DVD releases.