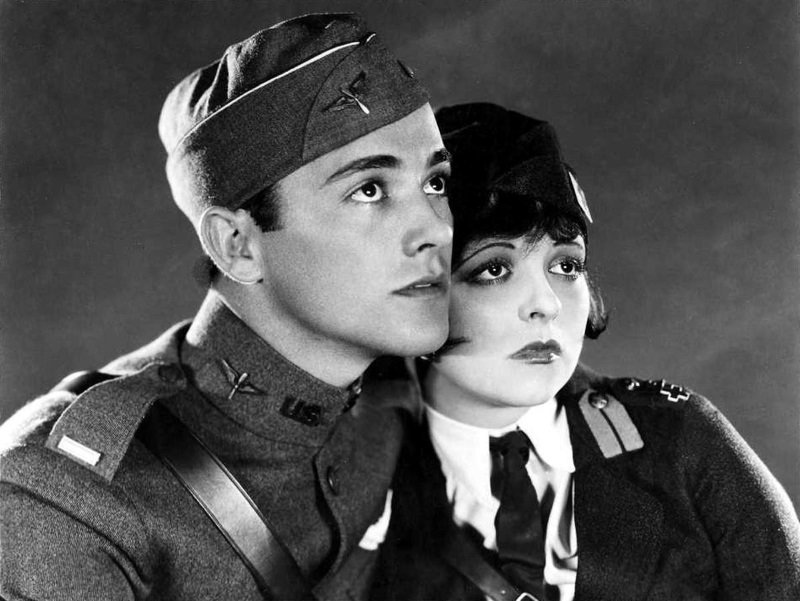 Clara Bow takes top billing in Paramount’s lavish 1927 war drama Wings (1927) and Charles “Buddy” Rogers and Richard Arlen (both virtual unknowns at the time) play the buddies and fellow pilots at the center of the film, but the real star of this World War I picture is the amazing aerial spectacle: the dogfights in the sky over the battlefields.

Director William Wellman, who was a World War I fighter pilot himself, invests us in the camaraderie of men in battle and fills the screen with the thrilling flight of the warriors. The magnificent dogfights, the sky swarming with planes, the downed ships spiraling down through the clouds with a tail of black smoke and yellow flame (color was digitally painted in for flourishes, just like the hand-coloring of the time) were all staged and shot for real and the budget soared to $2 million, making it one of the most expensive films of its era. Wellman makes sure it’s all there on the screen and in the process delivers a landmark: the last of the grand studio epics of the silent film era.

Wings will always have a place in film history: it won the very first Academy Award for Best Picture, while Sunrise was handed a kind consolation prize for “Artistic Quality,” an award never again given yet effectively announcing the real purpose of the Oscars: recognizing the intersection of art and success. Sunrise remains one of the greatest films ever made while Wings, a romanticized look at war, shows what Hollywood does best: sturdy studio filmmaking with romance, bonding under fire and rousing “war is hell” action.

And it marks the end of an era. The call of the sound revolution was ringing through Hollywood, as even the Academy (then merely an insider’s club picking the winners among themselves) had to acknowledge. The very same year that Wings received its “Best Production” award, the part-talky The Jazz Singer earned Warner Bros. a special award.

Paramount remastered the film beautifully a few years ago, bringing out the majesty of the production with a stunning restoration and a newly re-recorded score featuring pianist Frederick Hodges with period-accurate sound effects (from roar of engines to the rat-tat-tat of machine-guns) created by Ben Burtt (who concocted the audio universe of Star Wars ) using the simple tools of the trade that 1927 audiences would have been treated to. It’s a great introduction to the grandeur of Hollywood silent cinema at its peak.

It also won an Academy Award for its special effects and was added to the National Film Registry in 1997.

, iTunes, GooglePlay and/or other services. Availability may vary by service.
Wings [Blu-ray]

Paramount released the film on DVD and Blu-ray (adding one more silent offering to the Blu-ray format) in a beautifully restored and newly remastered edition that preserves the texture of the photography, and offers a choice of two scores: a re-recorded score composed by J.S. Zamecnik, orchestrated and arranged by Dominik Hauser and performed by a small orchestra featuring pianist Frederick Hodges with sound effects (from roar of engines to the rat-tat-tat of machine-guns) by Ben Burtt (of Star Wars fame); and an archival pipe organ score composed and conducted by Gaylord Carter. The organ score is stereo, the orchestral offers a dynamic 5.1 surround option.

There are three featurettes on the disc. The longest, “Wings: Grandeur in the Sky,” is more of a historical piece on filmmaking in the last silent era and runs under half-an-hour. Also includes “Restoring the Power and Beauty of Wings,” a 15-minute piece on restoring and digitally mastering the film and recreating the store, and “Dogfight!,” a 12-minute look at aerial battles on World War I. All of the supplements are presented in HD on the Blu-ray.