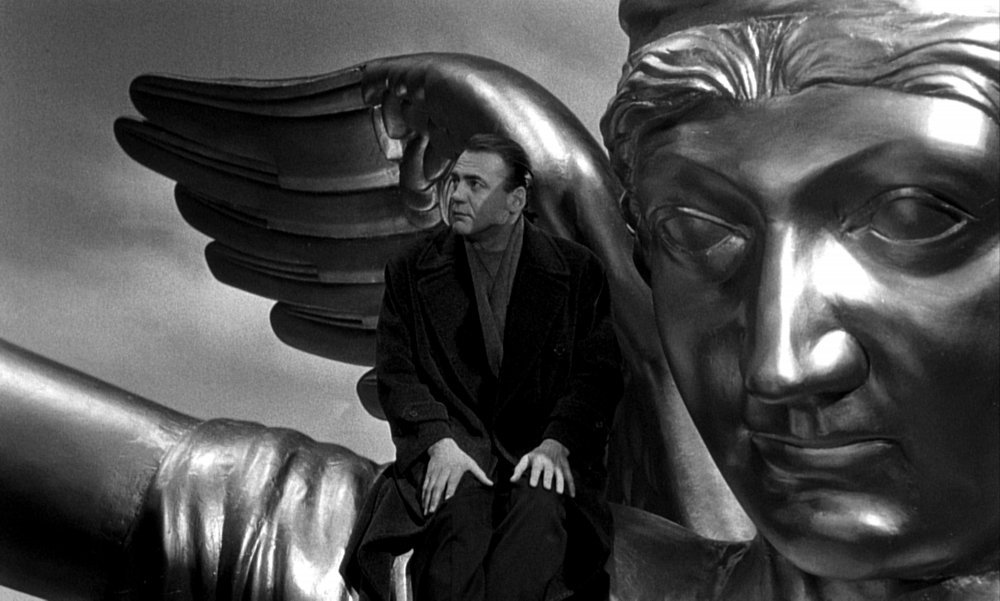 “There are angels over the streets of Berlin,” insists Wim Wenders in his lyrical fantasy Wings of Desire (Germany, 1987), but these are like no angels you’ve never seen.

Bundled in dark overcoats, they watch over the city with ears open to the heartbeat of the human soul, listening to the internal musings and yearnings of earthbound humans like existential detectives. In these delicate, astounding scenes we float through the thoughts of dozens Berlin citizens, from the weary and worn to the hopeful and young, as the angels record the magic moments for some heavenly record. But Damiel (the empathic and sensitive Bruno Ganz) wants touch, communication, the emotional rapture love and the colors of humanity, so when he falls in love with an angel of another sort, the lonely trapeze artist Marion (willowy, sad-eyed Solveig Dommartin), he gives up a life of contemplation and observation to experience the sensations of life himself.

Wim Wenders’ most purely romantic film is like poetry on celluloid, a celebration of the transient and fragile moments of being human: the warmth of a cup of coffee on a cold day, the embrace of a friend, the touch of a lover, the rapture of love. Opening with an angels’ eye view of Berlin in silvery B&W (delicately captured by the great cinematographer Henri Alekan, who photographed Jean Cocteau’s Beauty and the Beast forty years earlier), it transforms into a gauzy color world when Damiel “crosses over” by sheer will.

Peter Falk plays himself as a fallen angel with a special sensitivity for celestial visitors (“I can’t see you but I know you’re there,” he croaks with a grin as he gazes into the sky), and Otto Sander, whose smiling eyes brighten a face etched by eons of waiting and watching, is Damiel’s partner.

Wings of Desire is also a time capsule, capturing both the architecture and the culture of West Berlin two years before the fall of the wall (which is seen prominently on a couple of major scenes), and Wenders followed it a few years later with Faraway, So Close. It shares the love of life in the much more chaotic existence of a culture in transition but hasn’t the poetry or grace of Wings, a film attuned to the transient moments of being alive and fragile moments of human joy.

Wim Wenders was awarded the best director prize at Cannes and the European Film Awards and the film won the foreign film prize at the Film Independent Spirit Awards.

Not rated, in German and English with subtitles.

, iTunes, GooglePlay and/or other services. Availability may vary by service.
Wings of Desire (The Criterion Collection) [Blu-ray]

Criterion presents the film on Blu-ray and DVD and the Blu-ray edition is astounding, with black-and-white footage that looks both ethereal and crisp and the color is cool and clear and tactile. The commentary for this edition by prepared by Mark Rance from interviews he conducted with Wim Wenders (alone and with Peter Falk) between 1996 and 1997. The 43-minute documentary Angels Among Us, a loving, elegantly simple production directed by directed by JM Kenny in 2003, was featured on MGM’s earlier DVD releases, as was the gorgeous collection of deleted footage, but there’s a wealth of previously unseen archival discoveries. Heading the collection is the French television program Cinéma cinémas “Wim Wenders Berlin Jan. 87,” an interview with director of photography Henri Alekan, excerpts from the documentaries Alekan la lumière (1985) and Remembrance: Film for Curt Bois (1982), and notes and photos by art directors Heidi Lüdi and Toni Lüdi. Also features a booklet with an essay by film critic Michael Atkinson and writings by Wenders and screenwriter Peter Handke.