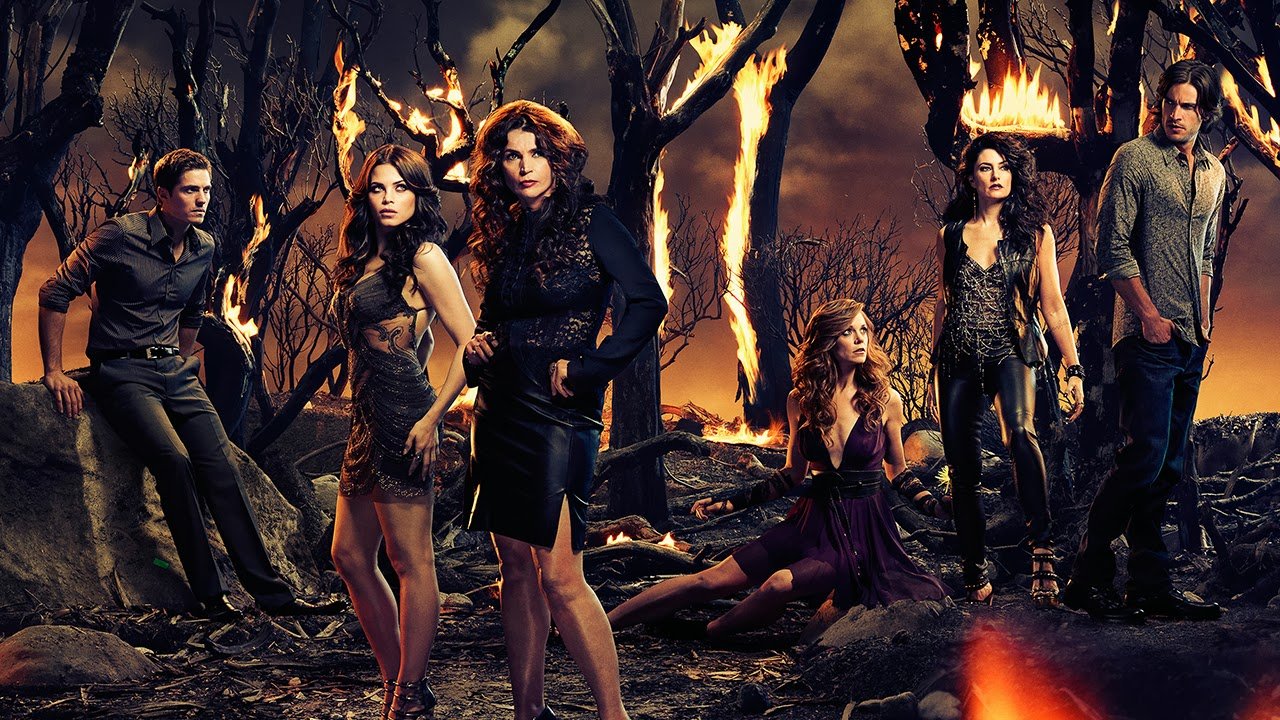 Lifetime Channel original series The Witches of East End (2013-2014) is not a remake of The Witches of Eastwick, mind you (creator Maggie Friedman already tried that) but a femme-centered supernatural series centered on a family of witches beset by a curse. Joanna Beauchamp (Julia Ormond) is immortal and doomed to watch her two daughters die before the age of thirty, at which point she becomes spontaneously pregnant again and the cycle comes back around, so this time around she hasn’t even told her girls, Freya (Jenna Dewan-Tatum) and Ingrid (Rachel Boston). Her more adventurous sister Wendy (Mädchen Amick), who has nine lives and a black cat alter-ego, arrives with news that Joanna and her daughters are in danger and sure enough, Joanna has an evil doppelganger show up and Freya is dragged into a netherworld by a centuries-old warlock. Time for a talk about their legacies. Protective mom Joanna reluctantly oversees their magic education and fun Aunt Wendy teases them with the fun side of magic. And of course there are the usual growing pains of mishaps and backfires along with the curses, attacks, and other weapons of magical warfare. Virginia Madsen co-stars as a Freya’s future mother-in-law and Enver Gjokaj, Jason George, Tom Lenk, and Joel Gretsch co-star.

The second and final season pits the women against the ruthless patriarchy they escaped centuries before. It turns out that this family of witches is actually descended from Norse gods. The vengeful Odin (a villain in this telling) is determined to enter the mortal realm to take them back to Valhalla or kill them for their betrayal, and he sends Joanna’s son (Christian Cooke) ahead to prepare the way. While this family drama of suspicion and torn allegiances plays out, Freya struggles with her attraction to not one but two hot guys: her rich fiancé, a successful doctor with a dark heart (Eric Winter) and his rebellious, bad-boy brother (Daniel DiTomasso), the black sheep with a good heart who is clearly trouble because his face is in perpetual five o’clock shadow.

The series was produced for Lifetime, where women are the focus, but it also borrows from shows like The Vampire Diaries and Once Upon a Time, where attractive stars and hot and sexy romances spice up the drama. The cheesecake is spread evenly across the sexes here, with Dewan-Tatum in revealing blouses and steamy sex scenes (lots of them dream sequences with the two hot Gardiner brothers, who constantly lose their shirts). And the two “matrons” of the show, Ormond and Amick, are just as confident and gorgeous, with Amick’s Wendy constantly losing her clothes after shapeshifting into a cat and back again (it’s commercial cable so no nudity, just a lot of skin and suggestion). It makes you wonder if the creators were hoping to snag some male viewers into the estrogen drama, or maybe they were acknowledging lesbian viewers along with the straight audience.

Whatever the demographic appeal, the show is fun and winning thanks to the strength of the four actresses. The family bonds grow and strengthen along the seasons of discovery for the two daughters and the reconnection of the estranged sisters overcoming past conflicts to bond over their pact to break the curse and protect the two girls from death. It’s also a sexy, somewhat cheeky supernatural drama with attractive stars, likable characters, a strong sense of family loyalty, and hot romances to spice up the magical threats to their earthly happiness.

, iTunes, GooglePlay and/or other services. Availability may vary by service.
Witches of East End: Season 1 [DVD]

The DVD of the first season features 10 episodes on three discs, plus a featurette, deleted scenes, gag reel, and a collection of bloopers with the cat. There are no supplements on the DVD set with the second season.