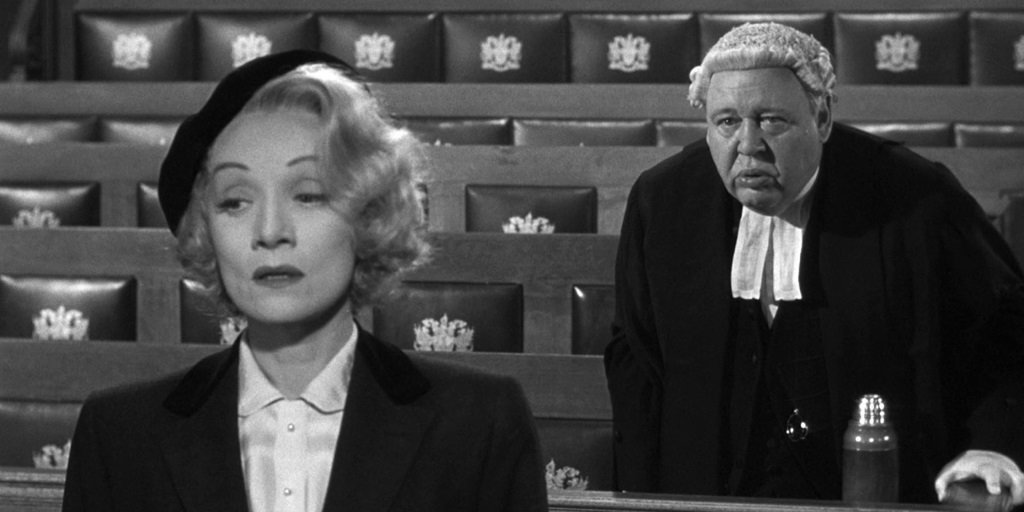 Based on the stage play by Agatha Christie, Witness for the Prosecution (1957) isn’t opened up for the screen so much as it is perked up with witty dialogue and wily characterizations, two strengths of filmmaker Billy Wilder and writing and producing partner I.A.L. Diamond. Charles Laughton plays the legendary barrister who defies doctor’s order and a heart condition to defend a charming but shiftless American (Tyrone Power) from a murder charge and Marlene Dietrich plays his German wife, a cool, suspicious character whose testimony seems to doom Power’s chances of acquittal. Of course, it’s a Christie plot so nothing is that simple, especially when incriminating letters are discovered, but the plot and the succession of twists is less interesting than the characters.

Laughton takes what could be a hammy role—the brilliant legal mind, theatrical courtroom performer, and wily curmudgeon sneaking brandy and cigars over the objections of his nurse (Elsa Lanchester)—and invests it with a sense of passion for his work and a sense of duty and honor beyond winning, all the while lobbing plum lines with perfect timing. He knows how to growl a witty riposte with a mix of cranky old man and affectionate codger and Lanchester responds with the perfect attitude of patient parent of an unruly child. Power plays to his strengths, a mix of cocky American brashness and showy earnestness, while Dietrich enters with a defining dignity and gravitas and then upends all sense of trust and expectations.

The Old Bailey set itself, designed by the great Alexander Trauner, is as much a character as the performers and Wilder uses it well in the film’s dramatic courtroom scenes. And the flashbacks that show Power meeting Dietrich in occupied Germany echo with Wilder’s earlier A Foreign Affair, his first collaboration with Dietrich, as well as giving defining insight into Power’s true moral compass.

It was nominated for six Academy Awards, including best picture, best director, and acting nominations for Charles Laughton and Elsa Lanchester, and Lanchester won a Golden Globe award for her performance.

Not rated, in black and white.

, iTunes, GooglePlay and/or other services. Availability may vary by service.
Witness for the Prosecution [Blu-ray]

Witness for the Prosecution [DVD]

Kino’s release is mastered for the Blu-ray debut and new DVD edition from vault materials (unspecified in press release or on disc), though some sequences feature visibly inferior footage, likely from archival prints, to replace damaged footage. These scenes show less detail, fading and minor surface scuffs, and there is a thin vertical scratch in one section of the third act. The balance of the presentation looks excellent, with strong contrasts, good detail (it’s a tad soft compared to the Criterion standard) and an image that preserves the texture of a 1957 black and white film. It features excerpts from the documentary Billy Wilder Speaks with Wilder discussing the film and the source material.