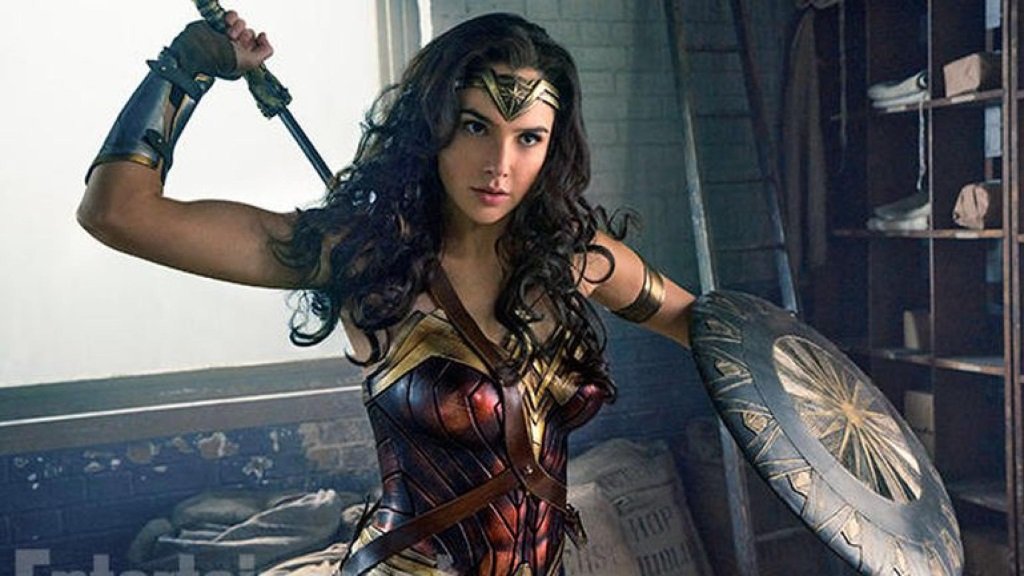 Wonder Woman (2017) is, if you’ll pardon such an obvious comment, a wonder of a superhero movie, a film that doesn’t transcend the genre but most certainly sets a high bar, especially next to the ponderous, humorless films of the new big screen universe of interconnected DC Comics heroes.

Gal Gadot debuted as Amazon princess warrior Wonder Woman in the turgid Batman v Superman: Dawn of Justice and brightened the film immediately. The spirit we glimpsed there carries this origin story, which sends us back to the 1910s and the hidden island paradise of the Amazons inadvertently invaded when American pilot Steve Trevor (an earnest yet spirited Chris Pine) flies past the invisibility field and crash lands on the beach, the first man ever to set foot on the island. Diana is intrigued to say the least but more compelled by news of a world at war and, after the inevitable assault by German forces after Trevor, is convinced of her purpose: stopping the god Ares from destroying all of mankind through warfare. She leaves the island against the wishes her mother (Connie Nielsen, commanding and regal). Steve’s not so convinced of that stuff about ancient gods and eternal Amazons but he has no doubt as to her abilities as a warrior or her commitment to justice and he knows a valuable ally when he meets one.

You can’t help but watch Gal Gadot when she’s on screen and not just because she’s beautiful (which she is) and poised. She’s both an alert, active warrior and a warm presence. Her smile is enchanting, her eyes are filled with ferocious emotion, and she moves with grace and strength, exuding confidence and conviction in her cause. Chris Pine loses all the machismo and swagger of his Captain Kirk for Trevor. He’s charming and gentlemanly but also a focused soldier and a moral man who learns early on that she’s the take charge type. Pine lets Gadot take the spotlight on screen with a grace that informs the character: Trevor ostensibly leads the climactic mission behind enemy lines but in the heat of battle, he’s following her lead and watching her back.

Director Patty Jenkins delivers on the action scenes and the obligatory spectacle of the genre with aplomb and ingenuity and the World War II setting gives her a fresh backdrop in a genre in danger of becoming repetitive, even if it does slip into the same superhero third act battle-to-end-all-battles, an increasingly tiresome convention trotted out in pretty much every superhero film that rolls out (and there are so, so many of them). And megalomaniac German officer Ludendorff (Danny Huston) and disfigured mad scientist Dr. Maru (Elena Anaya) sure act a lot more like evil Nazis of World War II (they conduct hideous, brutal experiments on live humans) than Prussian forces of the German Empire.

But there is great pleasure in the matter-of-fact way Jenkins and screenwriter Allan Heinberg make points about chauvinism, sexism, and equality through pointed humor and practical examples, and how deftly Diana sweeps aside all attempts by men to dismiss her. She’s no wide-eyed stranger from paradise confounded by the mechanical wonders of the industrial world. She’s a hero on a mission who has no time for politics or condescending old white men. Such forthrightness and honesty wins the loyalty of not just Trevor but all the men on the motley international squad of mavericks and hustlers (Saïd Taghmaoui, Ewen Bremner, Eugene Brave Rock) recruited for their mission behind enemy lines. When Diana charges into the no man’s land of trench warfare, she’s not simply impressive, she’s inspirational. When she lifts a German tank single-handedly while protecting inhabitants in a besieged French village, Steve has seen enough to not stop and gawk but follow her lead and save those civilians. She’s not worried about lines on a map. She’s all about the saving actual human beings and is outraged at the blithe destruction of innocents, and Gadot commits fully to the moral outrage.

For all the easy humor of her wide-eyed introduction to consumer culture and sexist society in London (a gray, grimy city so removed from the lush nature of her Eden-like island), Diane isn’t naïve. She’s refreshingly direct and authentic. Wonder Woman revels in that authenticity and it makes for the most rousing superhero film out there.

Leaves HBO Max at the end of February. Add to My List

, iTunes, GooglePlay and/or other services. Availability may vary by service.
Wonder Woman (2017) [DVD]

The DVD and Blu-ray from Warner includes a couple of hours of featurettes and supplements. On the production side, “Crafting the Wonder” (16 minutes) provides the usual making-of overview, “A Director’s Vision” provides focused looks at key scenes (“Themyscira: The Hidden Island,” “Beach Battle,” “A Photograph Through Time,” “Diana in the Modern World,” (and “Wonder Woman at War,” about 5 mins apiece), “Warriors of Wonder Woman” looks at the Amazon warriors (10 mins), and “The Wonder Behind the Camera” welcomes aspiring filmmakers to the set (15 mins). Taking a step back to the source, “The Trinity” explores the origins and legacy of the comic book character (16 mins) and “Finding the Wonder Woman Within” shares the thoughts and feelings of artists and public figures who found inspiration in the character. Also includes five extended scenes and an alternate scene, and a blooper reel.