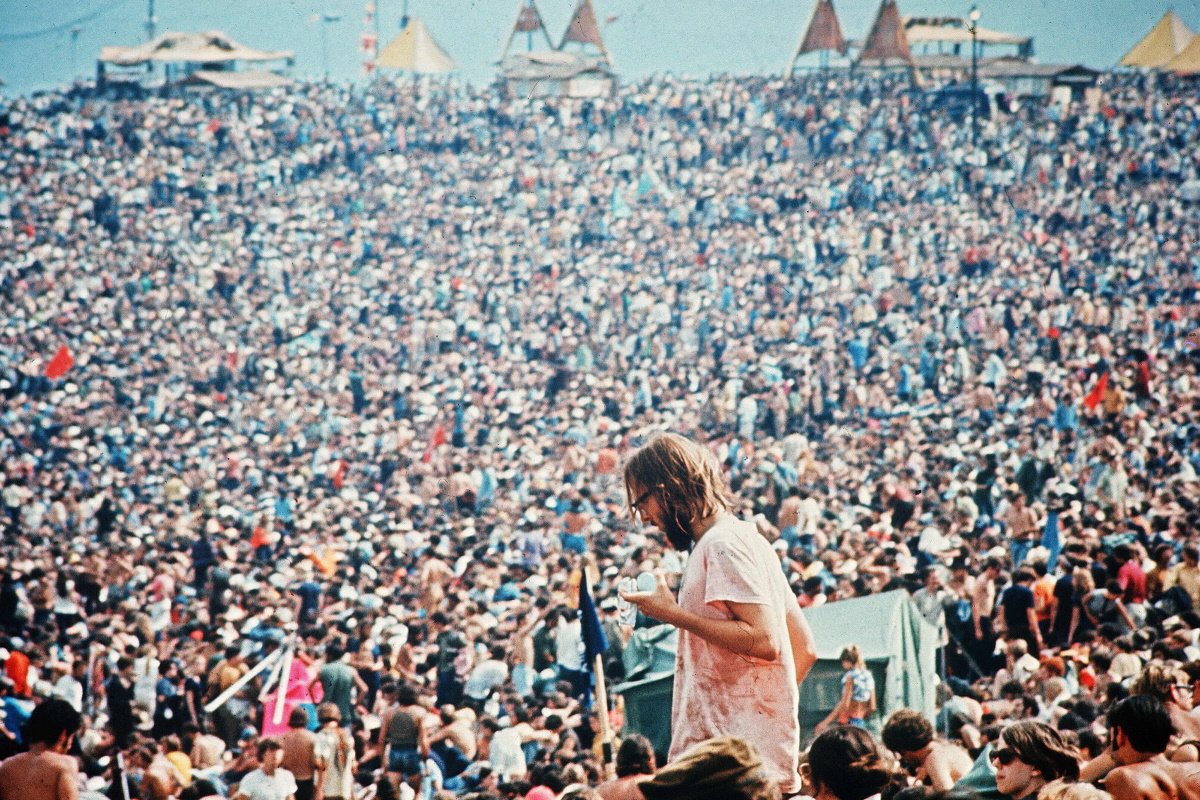 Woodstock (1970) is more than just a concert film. It’s a record of a cultural event.

“Three days of peace and music,” as the subtitle reads, it’s a chronicle of both the music and the community that formed around it and lived together for a weekend on Max Yasgur’s farm in Bethel, New York in the summer of 1969 (it was originally slated to take place at Woodstock and the name stuck).

Overwhelmed by unexpectedly large crowds, the festival organizers finally opened the gates and let the stream of arrivals in for free. It kicked off on the afternoon of Friday, August 15 with a set by Richie Havens and ended early Monday morning on a legendary performance by Jimi Hendrix, who burned brightly in his electric set and then literally burned his guitar in an unforgettable finale. Among the acts featured are Joan Baez, The Who, Arlo Guthrie, Sly and the Family Stone, Santana, Jefferson Airplane, Canned Heat, and the first live performance of Crosby, Stills, and Nash. By the time it was over, thirty two acts had performed before an audience of 400,000 people.

It’s the music that everyone remembers and the film is a time capsule of pop music and youth culture of the era. Director Michael Wadleigh and his crew (made up of students and alumni from the NYU film program) chronicled the event with five roving camera teams, working practically around the clock for three days on little sleep and little food. They spent almost as much time observing the audience as they do the musicians. People famously pulled together to feed the crowds in makeshift outdoor kitchens (“What we have in mind is breakfast in bed for four hundred thousand”) and for all the chaos, the event came off without violence or disruptive conflict. More than a concert, Woodstock became a symbol of an era and even lent its name to the times: “The Woodstock Generation.”

The finished film charts the evolution of the event over the course of the weekend: three days in three hours. The creative use of split-screens was brainstormed by fledgling filmmaker Martin Scorsese, a recent NYU graduate who worked as an assistant during filming and in the editing room with Thelma Schoonmaker. It was the beginning of a beautiful collaboration that lasted more than 50 years.

Woodstock won the Academy Award for Best Documentary Feature and was added to the National Film Registry in 1996.

In 1994, Wadleigh added 40 additional minutes of footage to the already three-hour running time for an extended Director’s Cut which added Janis Joplin and additional songs by Jefferson Airplane, Jimi Hendrix, and Canned Heat.

Rated R for nudity and adult language but it is all pretty innocent in the context of the spirit of the event.

Leaves HBO Max at the end of October. Add to My List on HBO Max

The Director’s Cut was originally released to Blu-ray in 2009 for the festival’s 40th anniversary. This edition includes all of the extras from that release – which includes “Untold Stories” (18 bonus performances from Joan Baez, Santana, The Who, Jefferson Airplane, plus Paul Butterfield, Credence Clearwater Revival, The Grateful Dead, Johnny Winter and Mountain, who played at Woodstock but never appeared in any film version) and the 76 minute “Woodstock: From Festival to Feature” – plus 14 more previously unseen performance by Santana, The Who, Crosby Stills and Nash, Joan Baez, Jefferson Airplane, The Paul Butterfield Blues Band, Melanie, and Sha Na Na.