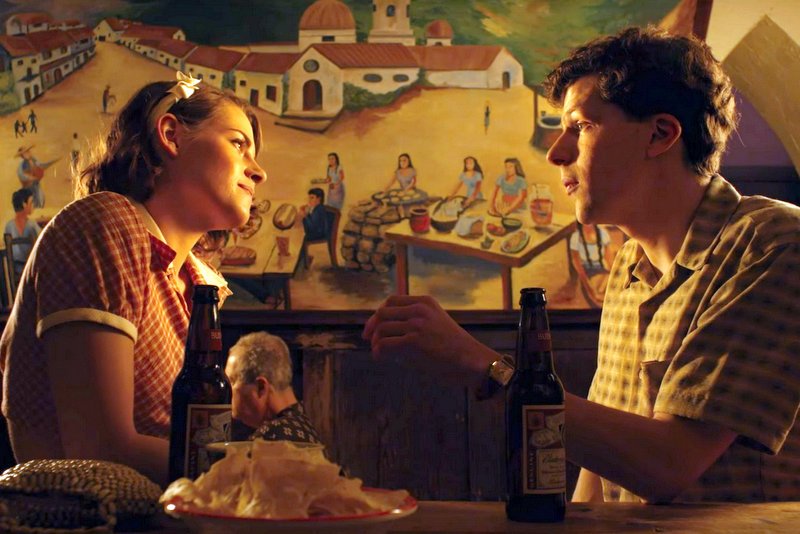 Woody Allen’s career may be erratic but it’s a pleasure to note that Café Society (2016), while well short of masterpiece, is Allen in fine form. Set in 1930s Hollywood, where East Coast kid Bobby (Jesse Eisenberg) flees from the family jewelry business in search of excitement, and New York City, where he returns after discovering he’s an East Coaster at heart, it’s a love story that dances through the show-biz name dropping of Hollywood, the gangsterism of Bobby’s New York uncle Ben (Corey Stoll), and the kvetching and caring of his Jewish family gathering in the Bronx.

It’s Bobby’s Uncle Phil (Steve Carell), the hustling agent turned show business power player, that sends him East, hoping to cash in on that famed Hollywood nepotism, and after knocking around the city waiting for a meeting it finally pays off: he’s an errand boy, gopher, and eventually even groomed to move up in the family business, but along the way Bobby falls for Phil’s young secretary Vonnie (Kristen Stewart), a Midwest girl unaffected by her show biz surroundings. They are such natural couple with a palpable attraction that they seem inevitable… but it’s complicated. She’s seeing another man and he’s married and… well, there’s nothing too surprising in the way things work out but Bobby heads back to partner with Phil in a nightclub, which Bobby classes up and transforms into the place to be in the Big Apple, where the glamour meets the power and high society rubs elbows with underworld characters.

This is familiar territory for the Woodman—the bickering and banter of family, the moral and philosophical debates of Bobby’s left wing intellectual uncle (Stephen Kunken) failing to make his idealism work in the real world, the novelistic narration that Allen weaves through the film. He falls back on familiar shtick and recycles old jokes, and there are sloppy moments that suggest Allen should have gone for another take (Carrell stumbles over a couple of lines, absolutely out of character for his fast-talking, name-dropping power agent). But it looks beautiful, shot by the three-time Oscar winner Vittorio Storaro with a golden glow and sepia warmth, and there is an easy pacing through it all. If Allen is coasting on comic reflexes, he also gives us time to take in the stops of his nostalgic tour that, for all the satirical barbs, is an affectionate portrait of this golden age of bygone society. Even underworld “businessman” Ben loves his neurotic sister and his nephew and is so generous with advice, money, and opportunities that it seems beside the point that he drops his enemies into cement foundations, scenes that Allen delivers as screwball punchlines in a gangland comedy.

But what really warms the film is the wistful undercurrent of a powerful love affair that leaves its emotional mark even after Bobby and Vonnie have moved on to happy marriages and satisfying loves. The feelings of the potential of a romantic future and the regret over what was left behind never completely leave as an unexpected third act reunion reminds them. It’s a serious note that Allen never pushes into melodrama or tragedy. Rather, he lets it as a bittersweet reminder of how our past loves remain with us, an observation that perhaps feels more profound given the modesty of the rest of the film but nonetheless resonates long after the credits roll.