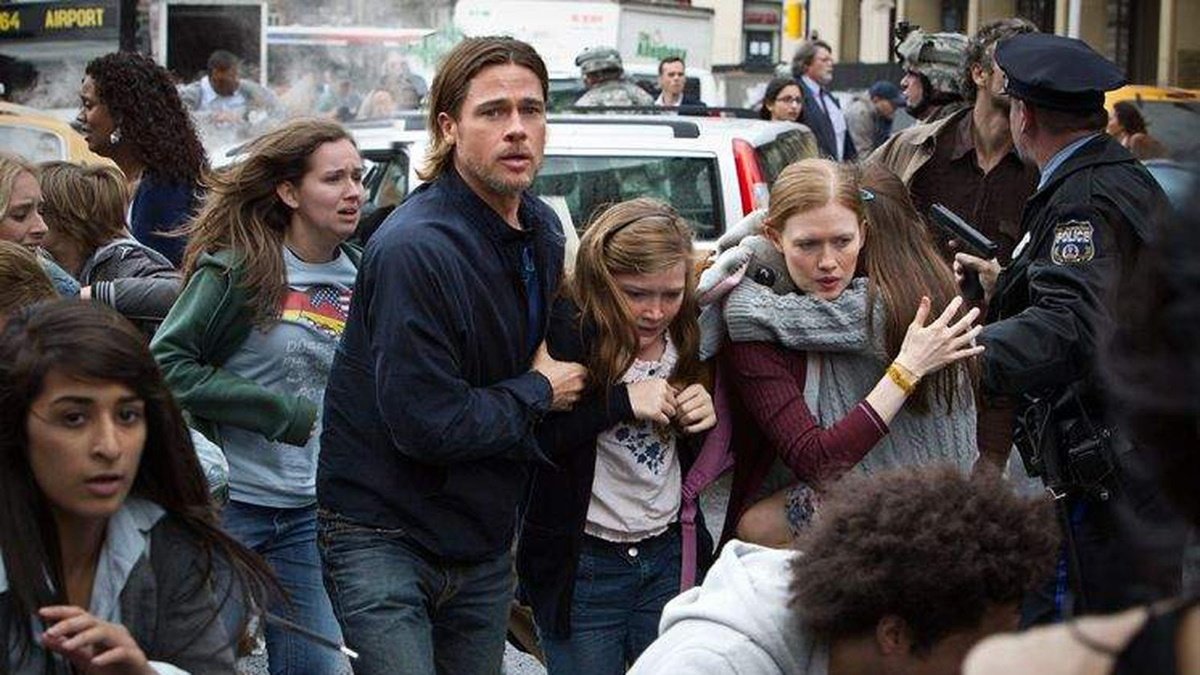 World War Z (2013), based on the best-selling novel by Max Brooks (yes, he’s the son of Mel), takes a global perspective on the zombie horror genre.

Where most films take the microcosm approach, with the zombies as handy metaphors for whatever strikes the fancy of the filmmaker, this film straddles the entire world as Brad Pitt, playing a former war crimes investigator, is drafted by the U.N. to search for the source of the virus burning through the civilized world.

That alone sets the film apart from most zombie movies, which are almost exclusively about survival, which frankly is a losing battle when the world is quite literally overrun with undead eating machines infecting everyone they bite. This is about staunching the spread of the plague, searching for a cure, and saving not just a few hardy survivor but the entire human race. It’s also about the moments of generosity and kindness and sacrifice in a time of fear and chaos, an essentially hopeful portrait of humanity in a hopeless situation.

The screenplay preserves the episodic structure of the book (which reads like a fictional history of the coming plague) while adding the action thriller / mission odyssey storyline to create a narrative backbone. Pitt was a producer on the film and brought on director Marc Forster, a director with less than stellar action credentials (he fumbled the Bond franchise with Quantum of Solace) but has proven himself sensitive to intimate drama and emotional turmoil (Monster’s Ball). Forster proves adept at choreographing the chaos of a world overrun by the hive behavior of zombie masses and creating a cinematic order to the presentation, and along the way he contributes a few stunning images that capture the unreal horror of the situation with startling immediacy.

What could have been an awkward mix (and pre-release articles were predicting disaster due to last-minute reshoots and an entirely re-conceptualized third act) is in fact quite effective in putting the focus on the human equation of the horror. It turns out that Pitt is a pretty savvy producer in his own right. He helped bring the film back to Earth.

On Blu-ray, Blu-ray 3D, and DVD. The Blu-ray editions feature both the theatrical version and an extended unrated cut that runs seven minutes longer plus three featurettes.