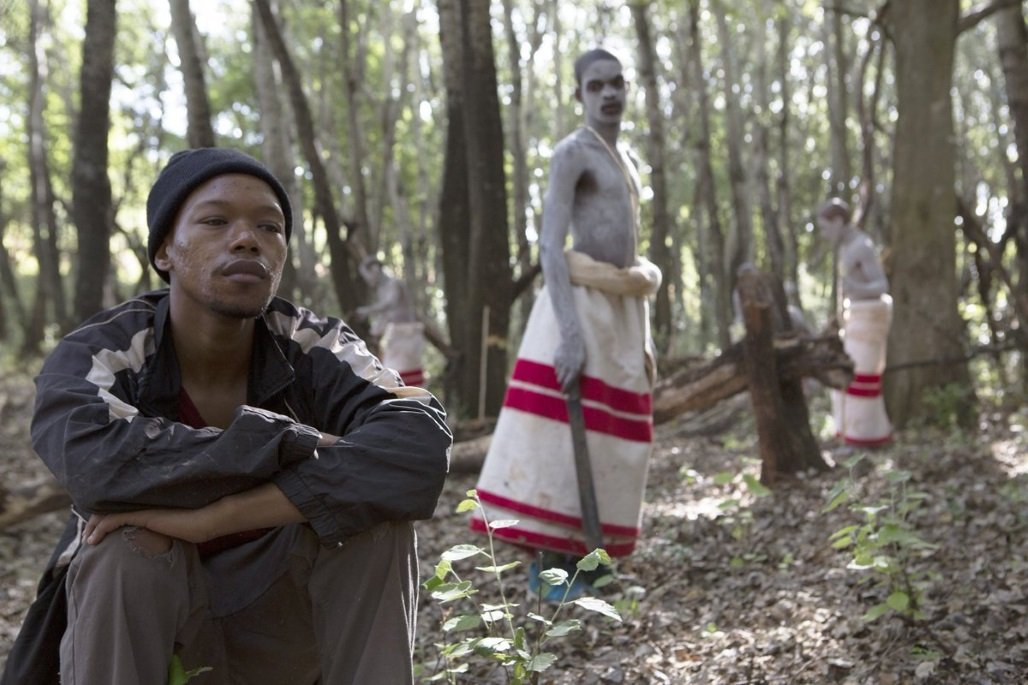 Set in the Xhosa community in rural South Africa, The Wound (Inxeba) (South Africa, 2017) is a fictional drama about a real-life ritual from a tribal culture that is still practiced by some members of the community in modern times.

The Ukwaluka is a rite of manhood for young male teens, the “initiates” of the ceremony (which includes ritual circumcision,) that takes place in the mountains over a couple of week. Kwanda (Niza Jay Ncoyini), a smart, self-possessed boy raised by his mother in Johannesburg, is brought by his father, who thinks his son is soft and needs to be toughened up. The story, however, focuses on Xolani (Nakhane Touré), who went through the ceremony years before and returns every year as a “caregiver” to watch over the next generation of boys.

The Xhosa culture values masculinity and disdains homosexuality (at least as presented in the film) and the lonely factory worker Xolani hides his true sexual nature until the annual rite. Every year he meets up with boyhood friend Vija (Bongile Mantsai), now a married man and father who puts on a front of bullying machismo in pubic but secretly meets up with Xolani for sex, a secret that Kwanda quickly figures out.

Films about old or ancient cultures hanging on in the modern world usually resort to sentiment, a mourning for the loss of old values and traditions. The feature debut of filmmaker John Trengove takes a more nuanced approach. He directs with a straightforward, unadorned style that has the directness of a ritual and puts each situation in focus without showing any explicit imagery. And he reveals the brutality and bullying behind the old traditions and attitudes maintained in the modern world that creates shame and pressures men into hypocrisy.

That may not be the story you expect given the first few minutes, but it makes for a more interesting film and a provocative drama. This doesn’t follow the usual script.

It was South Africa’s submission to the foreign language Oscars.

In Xhosa, with some dialogue in Afrikaans and English, with English subtitles.

, iTunes, GooglePlay and/or other services. Availability may vary by service.
The Wound [Blu-ray]

The DVD from Kino Lorber features an interview with filmmaker John Trengove (in English) and the director’s 2014 short film “The Goat,” which also focuses on the Ukwaluka rite and could be an initial sketch from which the feature was born.