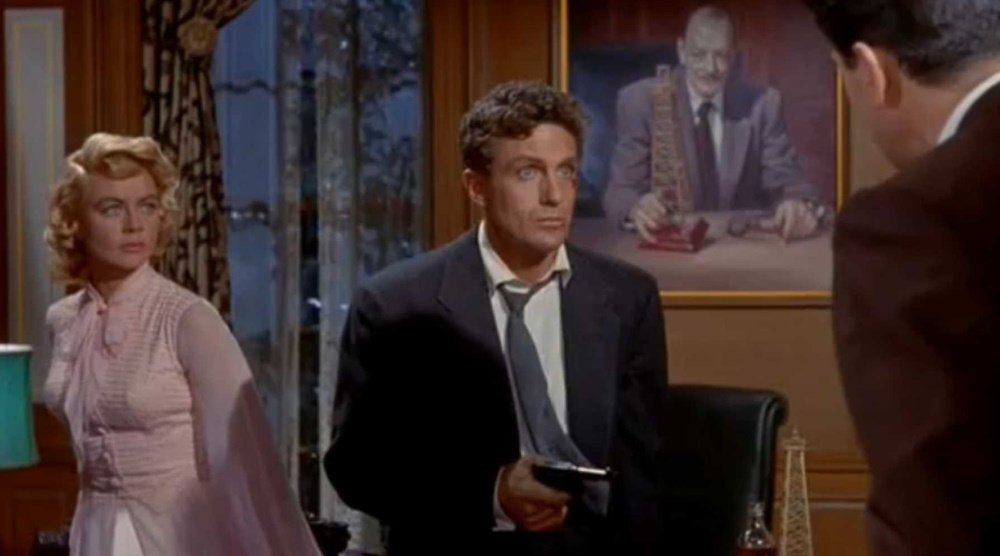 Douglas Sirk puts the opera back into “soap opera” in the exquisitely baroque melodrama Written on the Wind (1956). And it kicks it from the opening credits: a rushing car, a brewing storm kicking up leaves and whipping the trees, a gunshot, and a man stumbling out of the mansion before the pages of the calendar flip back to where it all began.

Rock Hudson (as wonderfully wooden as ever) and Lauren Bacall  play stalwart examples of altruism, clean living, and good old American ambition, but the film is stolen by Robert Stack as a souse of a playboy, always in motion in an effort to outrun his under-achieving shame, and Dorothy Malone as sex-mad sister, white trash millionaire siblings stewing in self-pity.

Stack twists his arch delivery into the practiced bravado of a boozing womanizer nursing an inferiority complex while Malone sashays and flirts her way through an Oscar winning performance as a slutty, sassy good-time girl. It’s so over-the-top that it might seem kitchy at first glance, but former theater director Sirk subtly shades his vision in the shadows of film noir and uses the portentous angles and gaudy color to create a vivid, vivacious world of glossy surfaces and social masks cracking under the pressure of responsibility and the pain of lost love. It’s a delirious rush of melodramatic extravagance in hyper-real Technicolor gloss.

Dorothy Malone earned an Academy Award for her performance.

, iTunes, GooglePlay, Fandango, Vudu and/or other services. Availability may vary by service.
Written on the Wind (The Criterion Collection) [DVD]