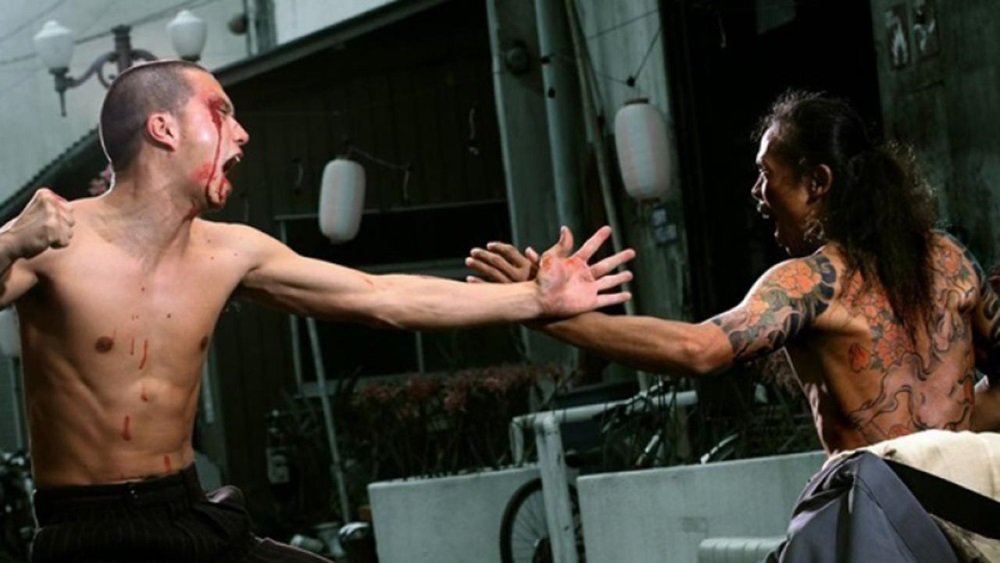 Yakuza Apocalypse (2015) – Takashi Miike, once the absurdly prolific wild man of Japanese cinema, earned a reputation for cranking out as many as four wildly inventive, full-throttle action, gonzo genre busting pictures a year. He’s slowed down as of late and even gone a little upscale; his 2011 13 Assassins (a collision of The Seven Samurai and The Dirty Dozen) was a mainstream samurai action hit and Hara-Kiri (2012) a remake of a beloved Japanese classic of honor and revenge. Yakuza Apocalypse brings him back to the wild and weird Miike, with extreme action, bloody spectacle, goofy humor, and abrupt curveballs every time you think you think you’ve got a handle on it.

Simply put, this is Yakuza gangsters versus vampires, but it’s more inventive than that: the newly-turned civilians (transformed by the mutated bloodline of an undead gangleader) aren’t merely insatiable bloodsuckers, they are vampire yakuza, full of attitude and an inclination to turn every potential difference of opinion or perceived insult into a fight. You kind of pity the merely mortal gangsters as they see their own sneering arrogance thrown right back in their faces. Miike and screenwriter Yoshitaka Yamaguchi spoof both genres with big bloody grin while making a sly commentary on gangsters as bloodsuckers who feed on civilians.

There’s also a vampire godfather who dresses like a puritan and wields a steampunk blunderbuss that fires a blast that can level the undead, a turtle demon with a beak so unsettling you can’t stop staring and halitosis so pungent it becomes a running adolescent joke, and “the world’s toughest terrorist” dressed in a baggy costume that looks like it was stolen from a second rate theme park. I think it’s supposed to be a frog but who knows? And who cares? Like a lot of Miike films, this leaves a lot of things unanswered, fills the film with weird unexplained characters, and expects audiences to simply follow along through the surreal ecosystems he creates.

And you do if you enjoy this kind of gonzo filmmaking. Some folks will find this a long (almost two hours) slog through an indulgent gangster fantasy huffing the fumes of manga paint. Others will be giggling too much to care.

, iTunes, GooglePlay and/or other services. Availability may vary by service.
Yakuza Apocalypse [DVD]