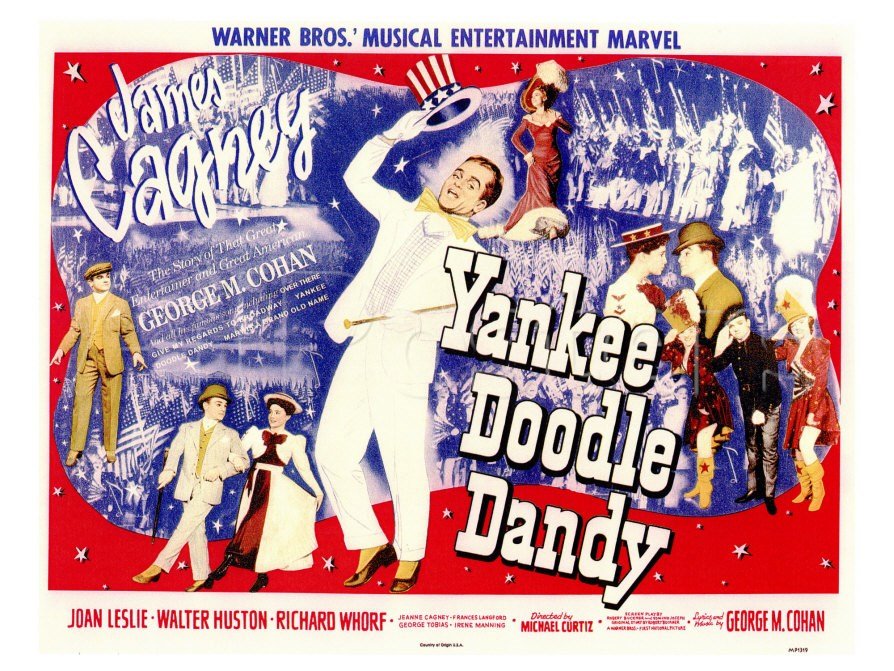 Yankee Doodle Dandy (1942) – James Cagney won his only Academy Award playing George M. Cohan in the rousing bio-pic directed by Michael Curtiz, who was the top director at Warner Bros. and arguably the studio’s most versatile filmmaker at the time.

Cagney was a song-and-dance man before he found fame as a movie tough guy and he returns to his roots with a passion, dancing his way through the role with straight-backed, stiff legged formality while his body is coiled like a loaded spring about to leap. The story of Cohan’s spunky rise in the showbiz world is pure Hollywood hogwash, but it is delightful hogwash invigorated by Cagney’s cocksure drive as the vaudeville headliner who turns his songwriting talents into a Broadway powerhouse.

Walter Huston and Rosemary De Camp play his vaudevillian parents and Joan Leslie is the love of his life (for whom he writes the song “Mary’s a Grand Old Name” – “plain as any name can be”). It’s a real flag-waver of a show-biz tale, a Fourth of July celebration with Cagney setting off the fireworks, and it features Cohan’s greatest hits, among them “Forty-Five Minutes from Broadway,” “Harrigan,” “Give My Regards to Broadway,” “Over There,” and “The Yankee Doodle Boy.”

It was nominated for eight Academy Awards and won three Oscars, including Cagney’s well-earned award.

Warner released the film as a two-disc special edition on DVD and in a remastered Blu-ray edition of the film a decade later. Not all of the extras from that set have made it to this single-disc Blu-ray, but I’d say that the most essential supplements are there. That includes commentary by film historian Rudy Behlmer (an expert on Warner Bros. studio history), the 45-minute documentary Let Freedom Sing!: The Story of Yankee Doodle Dandy, the 1943 propaganda film You, John Jones with Cagney, the 1943 cartoon Yankee Doodle Daffy, an “Audio Vault” of archival audio-only extras, the trailer, and the “Warner Night At the Movie 1942” collection of ephemera hosted by Leonard Maltin (with the cartoon Bugs Bunny Gets the Boid, short subject Beyond the Line of Duty, a newsreel, a Casablanca trailer).