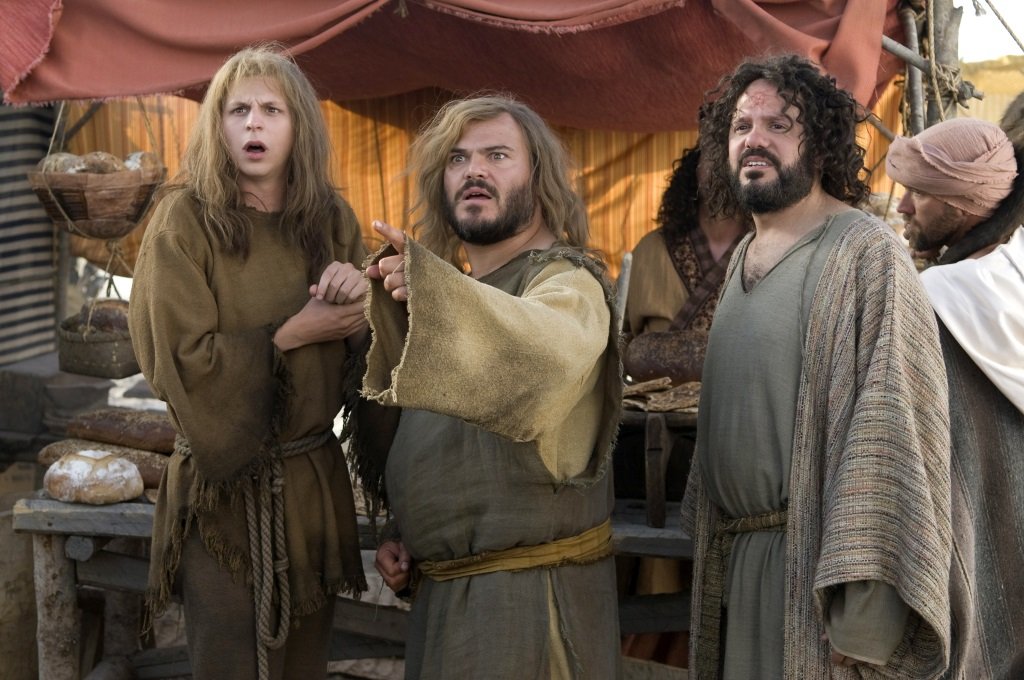 Jack Black and Michael Cera are philosophical cavemen misfits who wander out of their pocket of Eden and into the Holy Lands of Biblical lore in Year One (2009), the History of the World according to Harold Ramis. They are Zed and Oh, ostensibly members of a pre-civilization tribe of hunter/gatherers, but despite the caveman hair and animal skin fashions they are simply Jack Black and Michael Cera slipping their familiar schtick into a historical lampoon. They’re the self-aggrandizing blowhard and the sweetly shy man-child as the goof and the geek of prehistoric man, where tribal politics is curiously similar to playground pecking order.

The exact positioning of Year One on the historical timeline is a little vague. Or perhaps imaginary. When Zed takes a bite from a golden apple from the forbidden Tree of Knowledge, they are banished from the bubble of Eden and left to wander the Holy Lands of Biblical lore: sharing a meal with Adam and family, traveling to the twin sin cities of Sodom and Gomorrah with Cain (David Cross) as their predatory travel guide, slipping in and out of slavery and servitude and prison as they try to free the women they love (Juno Temple and June Diane Raphael) from captivity. Along the way they debate the meaning of life and the existence of God like an adolescent raunch comedy reworking of vaudeville philosophers Didi and Gogo in a Samuel Beckett rewrite of Mel Brooks’ History of the World by way of Teenage Caveman.

The first feature from Harold Ramis since The Ice Harvest is less hysterical than his signature comedies (National Lampoon’s Vacation and Groundhog Day) and more meandering than his best films. It could be the influence of producer Judd Apatow, or Ramis slipping back into his improv roots with the help of the Apatow comedy veterans in the cast, or just the inevitable tenor of a road movie comedy that sends a pair of introspective cavemen through a goof of Biblical epics in a script that feels more sketched than written.

Black’s Zed struts and double talks with oblivious (and unfounded) confidence in his own competence and Cera’s Oh stammers and whines and babbles when he should be taking a stand, or at least a chance. That’s pretty much what keeps the film going between underwhelming gags and comic situations. When did comedy writing become such a lost art, replaced by the improvisational byplay of talented but increasingly familiar players left to think up funny lines for an amusing situation? Oliver Platt makes it work as a mincing high priest with a hankering for Oh and a chest that could double as a bear skin rug and Hank Azaria is so crisp and snappy as Abraham, a man on a quest from God to circumcise his way through his people (“It’s going to be a very sleek look,” he assures Zed and Oh), that he reminds us that comedy used to be all about timing.

The rest is mildly amusing with jabs of wily inspiration and long stretches of obligatory adolescent sex and excrement jokes. But for brief moments the questing and questioning of Zed and Oh become genuine and even touching efforts to find some kind of meaning in the mess (of the film and of life), and touchstones in a relationship between two oddballs who dare wonder aloud about what everyone else takes for granted. I wish there was more of that Ramis in the rest of the film.

, iTunes, GooglePlay and/or other services. Availability may vary by service.
Year One (Theatrical & Unrated Edition) [Blu-ray]

Available on Blu-ray and DVD in both PG-13 and the unrated versions, the latter only a couple of minutes longer. Jack Black and Michael Cera join writer/director Ramis for a jovial commentary track full of lighthearted conversation and a thoroughly inconsequential making-of featurette. The two deleted scenes are entertaining enough and there are ten extended/alternate scene, but the most fun is the “Line-O-Rama” montage of alternate punchlines and improvisational dialogue. The unrated edition features both versions, an unrated gag reel, a couple of gag pieces and a terrific alternate ending with a rain of fire on Sodom. The Blu-ray exclusives are BD-Live enabled and unavailable at the time of review.