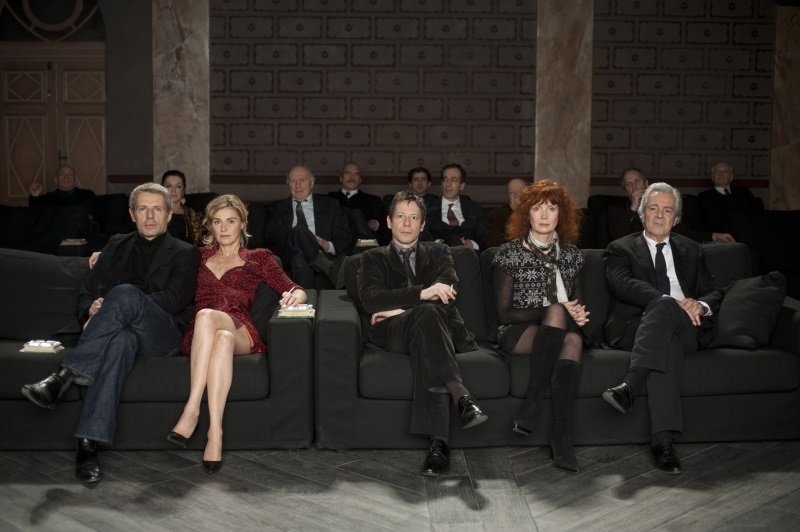 Alain Resnais was the most narratively experimental and ambitious of directors at the birth of the nouvelle vague, startling audiences with the short documentary Night and Fog (about the Nazi death camps) and the features Hiroshima Mon Amour (ruminating on the bombing of Hiroshima and Nagasaki) and Last Year at Marienbad (which you could say was narrative storytelling rethought in terms of quantum physics). Resnais was no less serious about filmmaking in the final decades of his career but his approach changed. He favored comedy, became more playful, and channeled his love of theater into his films, but his final two films also raised a glass to life by confronting death and mortality.

Life of Riley (France, 2014), his final feature (Resnais died a couple of months after its debut at the enviable age of 91), is a pleasant frivolity, a mix of bedroom farce (without the bedrooms), romantic comedy, and self-aware theater that opens on the first day of rehearsals and ends after closing night, with a coda that brings us back to the themes of mortality and emotional connection. It’s the end of a filmmaking career of over 60 years, perhaps not the last word he would have chosen but a pleasant variation on a theme in a rich career, minor but sweet.

Which brings me to You Ain’t Seen Nothin’ Yet (France, 2012), his penultimate film, which is more profound, more rapturous, and more stylistically exhilarating. This is the film I will remember as Resnais’ final word on love, life, and art.

In the opening moments, a roll call of France’s most celebrated actors of stage and screen from the past four decades are contacted with the sad news of the passing of a playwright. The actors are real—among them Mathieu Amalric, Pierre Arditi, Sabine Azéma, Anne Consigny, Hippolyte Girardot, Michel Piccoli, and Lambert Wilson—playing fictionalized versions of themselves. In this incarnation, they have all appeared in productions of “Eurydice” on the Paris stage and have been invited to the playwright’s country mansion for his wake, which in this case is a posthumous request to watch a fresh interpretation performed by a young company. They are asked to judge whether they are worthy of staging a new production but end up reenacting their own versions in tandem, aging actor reincarnating the young lovers of the Orpheus and Eurydice story.

Resnais melds two plays by Jean Anouilh for what becomes a film within a play, or a play within a film, though neither description really captures the Russian nesting doll quality of the deft merging and doubling of he two arts. I see it as living theater meeting the cinematic imagination of Alain Resnais, who wraps Anouilh’s two plays around one another for a new creation. Resnais crosscuts between performances and performers, creates split screens to compare separate versions, and at one point quarters the screen into four images. Yet the technique never overwhelms the performances. Rather, it sets each production within its own sensibility, none of them “realistic” yet all of them rooted in the reality of the actor.

It’s a joy to see the young company, all age-appropriate to their respective roles, pull us into the drama of the play’s characters and lives by virtue of commitment. It’s a revelation to see sixty-something veterans Pierre Arditi and Sabine Azéma (a longtime Resnais muse and collaborator) channel the essence of youth and impulse through performance alone and transform themselves into twenty-something lovers as passionate about life as they are about one another. Resnais finds no conflict or irony in the contrast of performer and role and nothing nostalgic is the exercise. Rather, he shows us how those seeming contradictions become unimportant in the magic of the moment. Where the lovers of the young cast have the glow of youth and impulse and roil with the anxiety of emotional conflict that turns every moment of their inexperience into a grand struggle, the elders give the lovers a wistful sense of the tragic, as if eternally fated to make the same mistakes.

Resnais presents the act of artistic transformation and interpretation as an energizing force: theater as a life all its own. What a magnificently cinematic celebration of the transformative magic of theater and performance and a reminder that sometimes the old dogs have the most fresh approaches to modern storytelling.

Also on Blu-ray and DVD and on SVOD through Amazon Video, iTunes, GooglePlay, Fandango, Vudu and/or other services. Availability may vary by service.
You Ain’t Seen Nothin’ Yet [DVD]