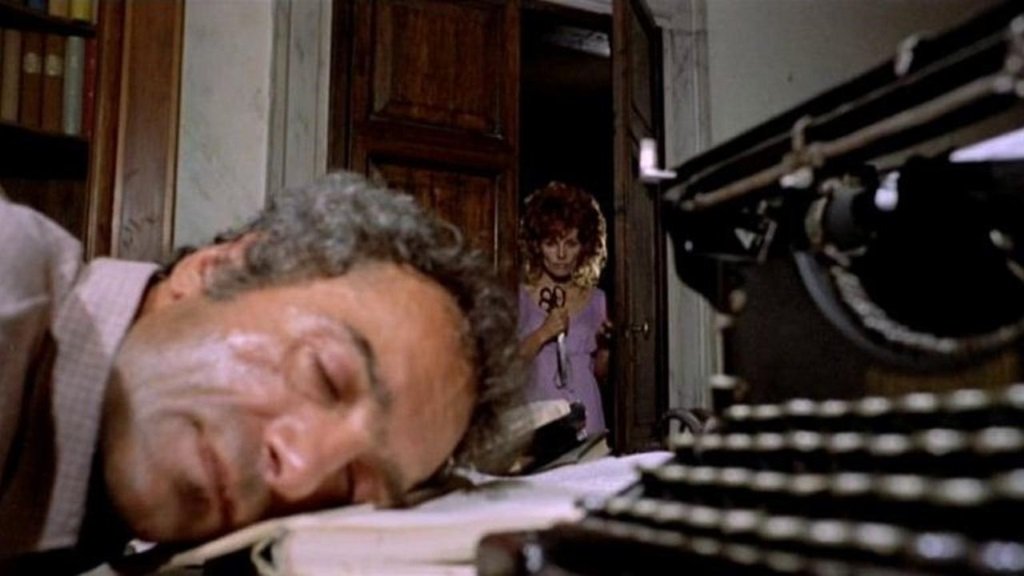 Your Vice Is a Locked Room and Only I Have the Key (Italy, 1972), directed by Sergio Martino and ostensibly inspired by Edgar Allan Poe’s “The Black Cat,” stars the voluptuous, dark-eyed beauty Edwige Fenech, the sex bomb of giallo, in what was (in the words of genre film historian Justin Harries) “Her finest and most atypical role.”

Oliveira (Luigi Pistilli) is a once popular novelist now blocked and taking out his frustrations on his poor abused wife, Irina (Anita Strindberg), who seems constantly on the verge of a nervous breakdown. He carries on flagrant affairs and plays the decadent lord of the manor for the flower children of a local tent camp. Fenech is the writer’s gorgeous young niece Floriana, a sexy free spirit who arrives for a visit and immediately stirs things up when she gets involved with a motocross racer, an affair that riles up the writer (who takes to stalking the couple for voyeuristic thrills). Meanwhile all of Oliveira’s mistresses are systematically and brutally murdered.

It’s classic giallo: a mysterious killer stalking beautiful women, interspersed with scenes of sex, sadism, voyeurism, and utterly gratuitous nudity. Harries describes it as “Sergio’s misanthropic magnus [sic] opus. It can be described as the work of Sartre filmed through a sexploitation lens.” But it’s built on a narrative architecture that is at least partially faithful to the Poe short story—a black cat named Satan, a family treasure, and a devious conspiracy of terror behind the murders. It’s just filled out with giallo twists and spectacle, the most glorious spectacle being the voluptuous, dark-eyed Fenech.

and other services. Availability may vary by service.
Your Vice Is A Locked Room And Only I Have The Key (Special Edition) [Blu-ray]

Your Vice Is a Locked Room features a new interview with Sergio Martino (34 mins), the retrospective featurette “Unveiling The Vice” featuring interviews with Martino, star Edwige Fenech, and screenwriter Ernesto Gastaldi (23 mins), the visual essays “Dolls Of Flesh And Blood: The Gialli of Sergio Martino” by Michael Mackenzie and “The Strange Vices of Ms. Fenech” with film historian Justin Harries (30 mins apiece), and a brief interview with Eli Roth. It’s also available in a box set with The Black Cat, which features commentary by filmmaker and Fangoria editor Chris Alexander, the featurette “Poe into Fulci: The Spirit of Perverseness” with film historian Stephen Thrower (25 mins), a new interview with actress Dagmar Lassander (20 mins), an archival interview with actor David Warbeck (70 mins), and the featurette “In the Paw-Prints of the Black Cat” on the film’s locations (8 mins). The box set is limited to 3000 copies and features a booklet. Also available separately with all the supplements except the booklet.