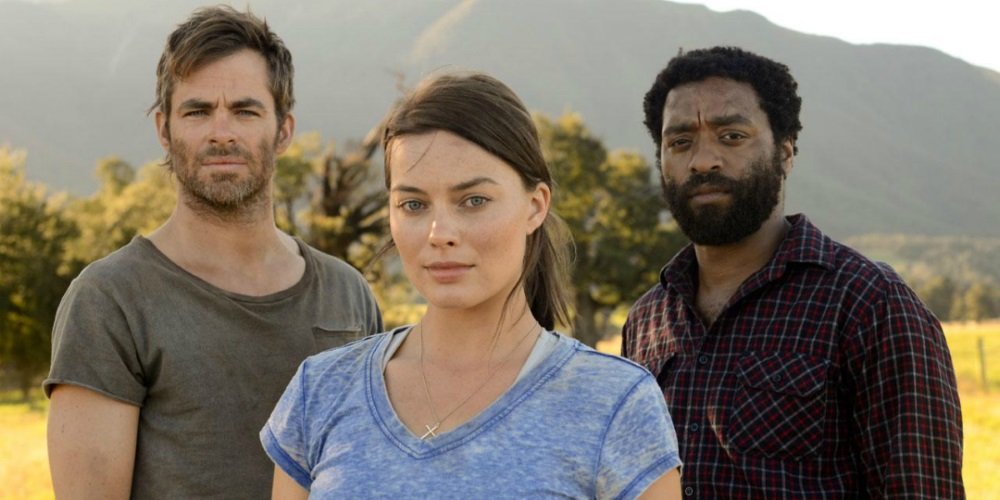 Z for Zachariah (2015), based on the cult novel by Robert C. O’Brien, belongs to smaller, more thoughtful, more intimate end of the science fiction movie spectrum. Limited to three characters and played out with nary a spectacular special effect, it’s in the tradition of low-budget post-nuclear films like Five and The World, the Flesh and the Devil: the last survivors of a world devoid of people learning that human nature is still the most dangerous threat.

Margot Robie is Anne, the last woman on Earth (as far as she knows) living in a valley protected from the radioactive fallout that has poisoned the rest of the world. Then one man in a radiation suit (Chiwetel Ejiofor) stumbles through, checking radiation levels, and she nurses him, an engineer named John, to health. And then, after their awkward but affectionate co-existence evolves to greater intimacy, a second man arrives.

Handsome and younger, Chris Pine’s Caleb, a miner who survived underground for months before desperation drove him out, is an immediate competitor for Anne. From John’s perspective, he’s the snake in his Eden, scheming something behind his blue-collar drawl. But turn the perspective around and it’s John whose seething jealousy drives suspicion to the point of paranoia. That ambiguity, and the film’s portrait of human co-existence in terms of wolf pack politics (there’s only room for one alpha here), is what’s most interesting, and Ejiofor’s performance gives John’s decency a dark edge. Race and class and sex are all wound up here, not mentioned but definitely weighing heavy on the triangle.

This is quite the Eden, a little too perfectly preserved, like a Norman Rockwell vacation cabin in a pristine hollow in the woods (New Zealand subbing for the American South) where the soil is rich and the local waterfall, while poisoned, could ultimately provide electricity. What actually happened to unleash the radiation is only talked about in vague terms, which I guess is appropriate for a film that is more parable than character drama.

It’s well acted and beautifully shot and the storytelling restraint of director Craig Zobel allows us to fill in the gaps with our own observations and interpretations of the tensions. That kind of invitation to the audience is rare enough even in independent films like this.

, iTunes, GooglePlay and/or other services. Availability may vary by service.
Z For Zachariah [DVD + Digital]