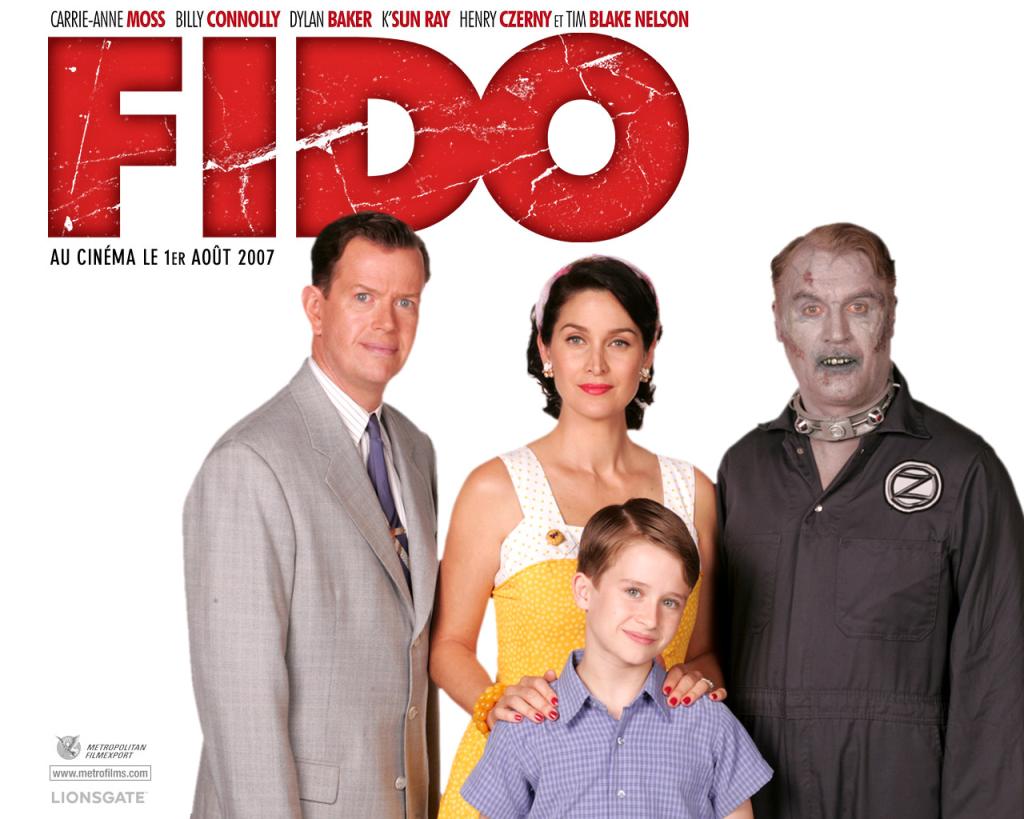 Andrew Currie’s spirited zom-com Fido (2007) drops the flesh-eating undead into a warped mirror of fifties suburban conformity and hollow appearances. In this alternate history/fantasy America, the Zombie Wars replaced the Cold War and the result is a nation of gated communities served by a stumbling underclass of enslaved zombies and policed by Zomcon, the ultimate military industrial complex of homeland defense.

Undead servant Fido (Billy Connelly, all but unrecognizable under an ash gray complexion and rot-black lips) becomes pet and best friend to neglected schoolboy Timmy. He’s not particularly articulate but he is utterly loyal, even when his buggy “domestication collar” fritzes out and he starts snacking on the neighbors.

Reduced to grunts and growls and (in one priceless scene) whimpers, Connelly is hilarious and endearing. A sly Carrie-Anne Moss is the frustrated housewife who becomes strangely attracted to the doting zombie while her oblivious husband (Dylan Baker) flees all emotional involvement, thanks to a legacy of childhood zombie war trauma (“Bill, just because your father tried to eat you doesn’t mean we all have to be unhappy”) that all the psychotherapy in the world is not going to heal.

Subtle? No, but it’s clever and funny in a thoroughly reimagined alternate universe, where the paternal smiles of authority figures hide an unchecked police state keeping the gated communities white, middle class, and compliant. Undercurrents of Douglas Sirk melodramas and Lassie movies just add to the fun.

Add to Amazon Prime Video watchlist or watch it on Hulu

Pingback: What to watch the week of Friday, September 11 - Stream On Demand
Comments are closed.