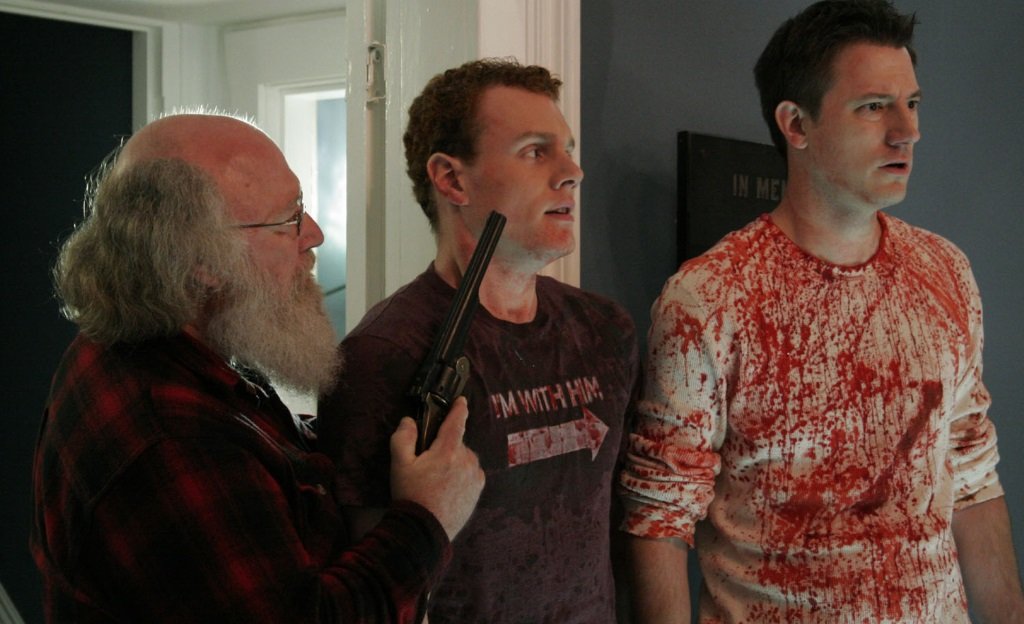 A horror goof movie with gay heroes, a Iranian-American leading lady (Janette Armand), and a farcical look at the of the post-9/11 world of culture wars mixed in with the splattery special effects, Zombies of Mass Destruction (2010) is a movie made for anyone tired of the religious hysteria, anti-Islamic paranoia and patriotic rhetoric used to justify all manner of behavior.

The setting is Port Gamble, a small Pacific Northwest island town equivalent of Blue Velvet‘s Lumberton, complete with the white picket fences but minus Frank Booth and his underworld gang. Instead, there’s a viral outbreak that turns everyone into zombies, immediately blamed on an Islamic terrorist based on the flimsy evidence of remarks made on an internet video. The joke is that no one even questions the dubious evidence or challenges the link.

This is a town where the elder residents hang on to the tenuous old values with a fervor that excludes anyone who doesn’t agree with them (though they stop short of saying anything close to “If you’re not with us, then you’re with the zombies” – surely an oversight on the part of the writers). It’s easy to pick the most likely to survive from the ever-shrinking pool of non-infected; they’re the ones who are aghast at those pockets of militarist patriots and Christian extremists who refuse to let the facts confuse the certainty of their position (It’s Armageddon and only the sinners are struck down! It’s a terrorist plot by a Muslim fundamentalist! They hate us for our freedom!) or the ludicrousness of the distractions from the crisis at hand (because vengeance is more fun than prevention).

“Haven’t you ever seen a zombie movie?!!” asks the exasperated teenage son of an insolent neo-con preparing to torture a confession from the college girl next door. Apparently not, but he has seen plenty of what passes for news on the 24-hour spin cycle, where talking heads conflate opinion as fact and where the loudest voice is the winner by default. Who cares that she’s actually American born or that her father is from Iran, not Iraq? It’s not like there’s a difference.

There’s no style and no real sensibility beyond the easy targets and the satire is executed as farce, which basically means none of the characters are developed much beyond the basic type. The style is all in the spirited and colorful performances (which are surprisingly good in parts and effective throughout), the humor (it is awfully funny) and the special effects, which are executed with a creative professionalism between Hollywood gloss and The Evil Dead ingenuity. But more importantly, for all the spoofing of political rhetoric (“Some of us have to give up our rights to remain safe,” one neighbor blithely explains as he turns his basement into a detention center to torture a confession), no one stops to make a speech or debate the issues. The audience can take it as they will, or just sit back to enjoy the gory spectacle of Port Gamble turned into a zombie picnic ground.

Add it to Prime Video watchlist or to Hulu my stuff.

, iTunes, GooglePlay and/or other services. Availability may vary by service.
Zombies of Mass Destruction [DVD]