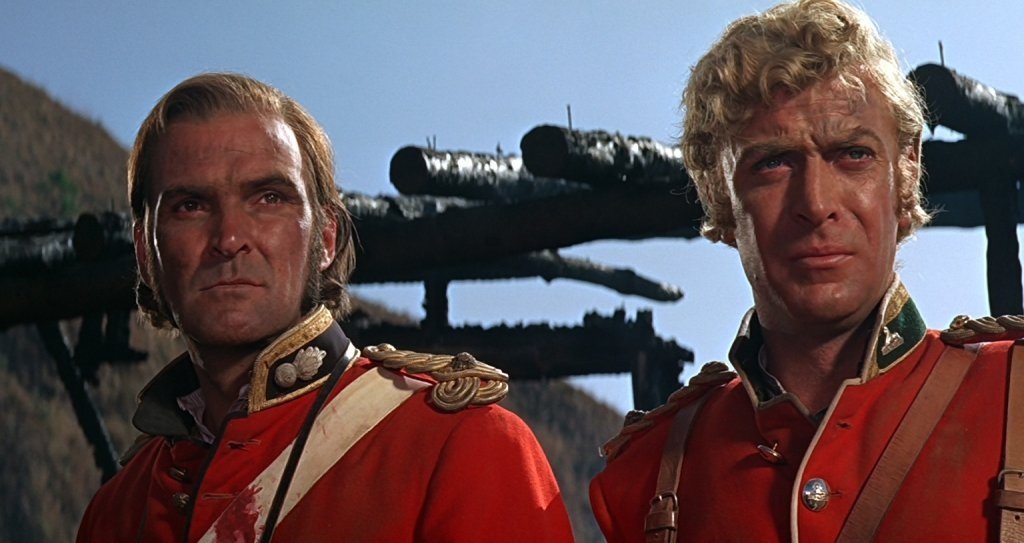 The sun sets on the British Empire in Zulu (1964), an historical epic built around a legendary colonial battle of the late 19th century. Legendary to British history, that is. The Battle of Rorke’s Drift in South Africa would be all but unknown in the U.S outside of historical societies were it not for Zulu. It was produced in the wake of Lawrence of Arabia and El Cid and they revels in the spectacle of battle (that whole cast of thousands thing) but it takes a more ambivalent view toward colonial adventure. The glory of the British Empire isn’t quite so glorious in this story of English military might in the name of conquest.

Shot mostly on location in South Africa (with some interiors back in the British studio), directed by American Cy Enfield (who moved to England in the shadow of the Hollywood blacklist), and co-produced by Enfield and Stanley Baker, who takes the leading role, it turns a piece of once-obscure history into a riveting drama. A British station with a contingent of about 150 men (including the sick and wounded in the hospital) are ordered to hold their ground when 4,000 Zulu warriors, charged up after massacring a force of over 1,000 British soldiers, surround them. The image is chilling: the station—not even a full fort, just a few buildings and a corral—is nestled in a ring of hills and the Zulu soldiers announce themselves by lining up along the rise around them. Psychological warfare at its best.

Baker plays an army engineer building a bridge across the local river and he takes charge from the station commander, an upper-class officer with even less experience under fire, more concerned with protocol and appearance than battle prep. That soft-spoken ponce is played by Michael Caine in his first major screen role (he gets the “Introducing” credit) and it launched his career, which curiously was made playing working-class blokes rather than society gents. Nigel Green stands out in a superb cast as the division Colour Sergeant, barking out orders with a firm but oddly comforting sense of control. In the chaos of the waves of suicide charges and surprise attacks poking at the station’s makeshift defenses, he offers a sense of order and direction and, when necessary, a comforting word.

You could argue that it’s something of a flag-waiver but Zulu is not about triumph. It’s about survival and luck, about arrogance and the cost of colonialism and occupation. Enfield keeps that landscape in the frame of almost every shot, reminding us that behind every single rise, rock, and field of grass is a potential strike force ready to emerge. There’s an eerie sense of being adrift in a world both familiar (the pale, dry-green hills are like a sun-parched English inland) and alien, then the attacks begin and the emptiness is engulfed by a sea of men. Though based on a true story, in Enfield’s hands it becomes almost ahistorical, an existential ordeal in the desert of the mind with a kicker of a conclusion.

On Blu-ray in a limited edition release from Twilight Time and DVD from MGM. The Blu-ray looks superb, well mastered from an excellent print, sharp with strong colors and no damage. It’s flawless and image pops out of the screen and the disc features an isolated audio track with the score, a dramatic and dynamic work from the always great John Barry. Also features a new commentary track by disc producer Nick Redman and screenwriter Lem Dobbs, both film lovers and film historians who have a tremendous affection for the film, and a booklet with notes on the film by film historian Julie Kirgo.