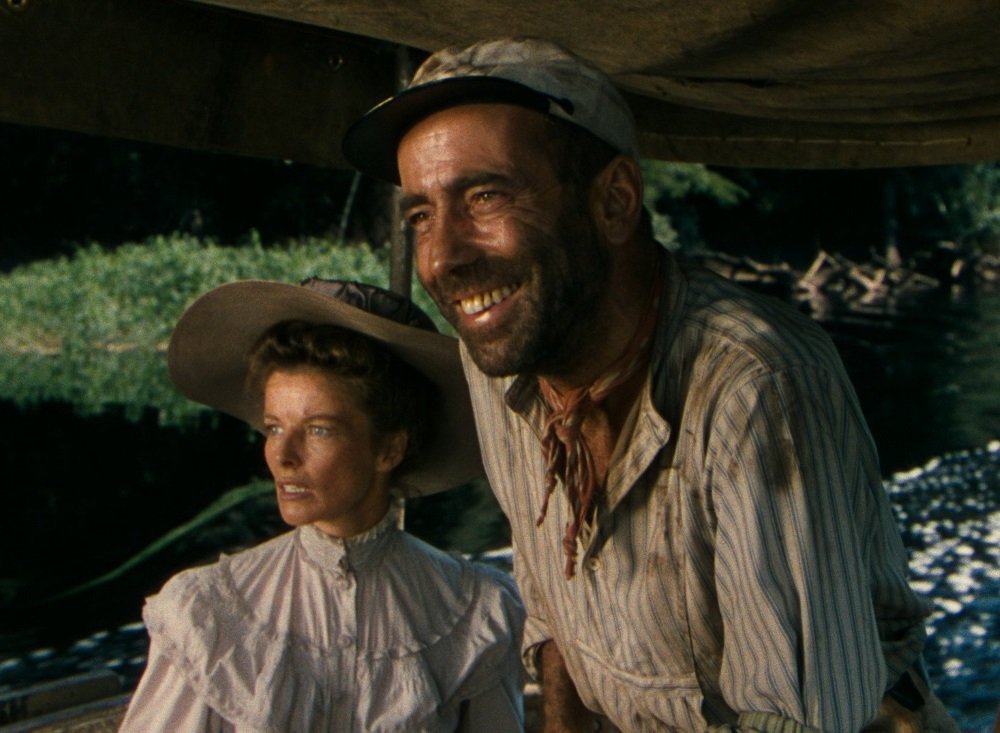 The African Queen (1951) – Humphrey Bogart is Charlie Allnut, the hard-drinking captain of a sputtering steam-powered boat that gives the film its title. Katharine Hepburn is Rose Sayer, a spirited missionary spinster serving the Lord in German East Africa with her brother (Robert Morley). It’s September 1914, the early days of World War I, and Rose watches German soldiers march off the local natives and burn down their huts, breaking her brother’s spirit (fatally, it turns out) in the process. The slovenly loner Mr. Allnut picks up the prim and proper Miss Sayer, who immediately proposes they strike back at the Germans with an impossible journey down the river (past a German fort and through dangerous rapids) and a makeshift torpedo to sink a German gunboat that patrols the lake.

John Huston, arguably the greatest Hollywood writer/director of literary adaptations, directs this adaptation of C.S. Forester’s novel, scripted by playwright and film critic James Agee. The film is a classic journey adventure, with a series of obstacles that they meet with resilience and resourcefulness, but the story is how they move from “Mr. Allnut” and “Miss” to Charlie and Rosie, opposites who find strength, support and unexpected love in one another.

These are not “pretty” characters, but they are beautiful and their affair is a natural force outside of society and the church. In the classic Hollywood shorthand, the film fades to black on a passionate kiss (a beautifully conducted scene) and comes up the next morning on the couple, all smiles and warm glows. The audience couldn’t have missed the cues and Huston just lets it play: these children of God have consummated their union in the wilds in the most natural way. There’s a certain amount of providence along the way, but even with a missionary on board there isn’t talk of God providing for them. There’s luck, there’s pluck, there’s Charlie’s practical know-how encouraged by the Rosie’s conviction, and there is the spirit that these two people bring to the journey. And there is the transformation of Rosie and Charlie themselves.

It’s great fun and a magnificent adventure, much of it shot on location in Africa, which Huston and Jack Cardiff, one of the all-time greats of color cinematography, uses to its fullest. Composer Allan Gray scores with strong themes in the old Hollywood style but Huston drops it out entirely for scenes to hear the jungle sounds, which are a little excessive but marvelously musical in their own right. It begins in the credits, which open with an orchestral flourish before the music drops out to foreground the chirps of birds and growls of animals as the camera drifts through the jungle, looking up at the trees as if laying down in the bottom of a boat. The African Queen itself, with its big, clumsy, temperamental steam engine, becomes a character and an essential part of the film’s personality and the engine’s distinctive sound – puck-a-puck-a-puck-a-puck-a – is a defining part of the soundtrack.

The African Queen earned Bogart his sole Academy Award and it received nominations for Hepburn’s performance, Huston’s direction, and the screenplay by Huston and James Agee. It was added to the National Film Registry in 1994.

It’s one of the most beloved and cherished Hollywood romantic adventures ever made. If you have not seen it, you owe it to yourself.

and other services and restored on DVD and Blu-ray:
The African Queen [DVD]

Both the DVD and Blu-ray from Paramount feature the hour-long documentary “Embracing Chaos: Making The African Queen,” a well-produced and detailed overview of the classic that reminds us that it was not a studio film but in fact an ambitious independent feature. The DVD and Blu-ray editions are also available in a Commemorative Edition, featuring a bonus CD with the original Lux radio adaptation with Bogart and Greer Garson, a reproduction of Katharine Hepburn’s out-of-print memoir “The Making of The African Queen or How I Went to Africa with Bogart, Bacall and Huston and Almost Lost My Mind,” a Senitype® film frame collectible reproduction and postcards featuring reproductions. This isn’t the lavish overkill you find in deluxe editions of Gone With the Wind or The Maltese Falcon, but it’s really all you need. This set is all about the movie and it’s a beautiful a restoration as you could hope for.