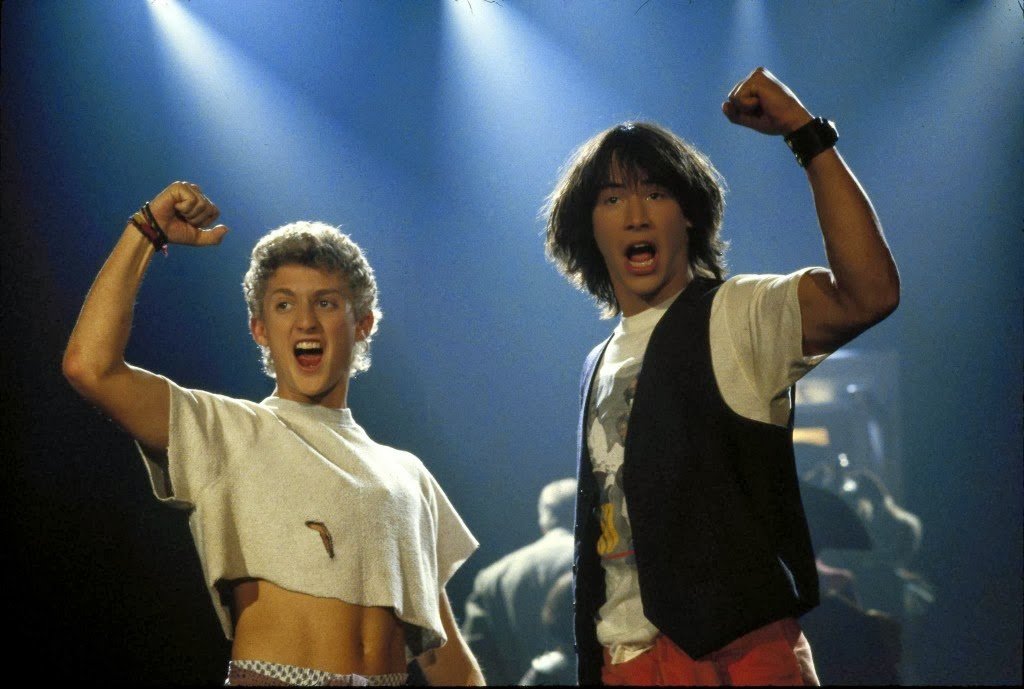 Whoa! Check out the cult slacker comedies that made Keanu Reeves a star.

In Bill and Ted’s Excellent Adventure (1989), Reeves and Alex Winter are the high school underachievers and would-be rocker stars who are destined to save the world with their music, or so claims their most excellent fan from the future, a time-travelling sage named Rufus (George Carlin). But first they have to pass high school history and learn to play their instruments.

Directed by Stephen Herek, this is a spirited doofus comedy sustained by the sweet, slack-jawed performances of Reeves and Winter as dumbfounded idiots who stumble through time to cram for their history final with the help of a time-traveling phone booth that allows them to round up Napoleon, Abraham Lincoln, Genghis Khan, Joan of Arc, Beethoven, and Socrates (among others) and bring them back to suburban California. Their finest moment: a meeting of minds with Socrates (aka “Soh-craits”) over a soap-opera proverb. “Like sands through the hour glass, so are the days of our lives.”

Peter Hewitt takes the reigns for the inspired sequel Bill and Ted’s Bogus Journey (1991), which is even sillier and funnier. Reeves and Winter are killed by evil robot doubles and sent to hell, where they play Twister with the Grim Reaper (a hilariously deadpan William Sadler with an indeterminate accent) and draft him into their band Wyld Stallyns (where the Grim Reaper goes show-biz with a vengeance). Wacky and weird and nonsensical, it’s hardly satire but the sheer invention of their ludicrous journey will have most dudes rolling on the floor.

Thirty years later, they reunited as middle-aged husbands and fathers with the same optimistic spirit and boyish energy in Bill & Ted Face the Music.

Both are rated PG.

They leave HBO Max at the end of March.

and Bill and Ted’s Bogus Journey

), iTunes, GooglePlay and/or other services. Availability may vary by service.
Bill & Ted’s Most Excellent Collection [Blu-ray]

The Blu-ray and DVD double features feature the 30-minute “The Most Triumphant Making-of Documentary” (with Alex Winter, writers Matheson and Ed Solomon, directors Stephen Herek and Peter Hewitt, and producer Scott Kroopf), the 20-minute interview featurette “The Original Bill and Ted: In Conversation with Screenwriters Chris Matheson and Ed Solomon,” plus “Score! An Interview with Guitarist Steve Vai,” “Hysterical Personages: A History Lesson” (on the historical characters on Excellent Adventure), “The Linguistic Stylings of Bill & Ted” (on their particular slang), and an air guitar tutorial by Bjorn Turoq and the Rockness.

Exclusive to Shout! Factory’s three-disc Blu-ray set are two new commentary tracks—one featuring actor Alex Winter and producer Scott Kroopf, the other with writers Chris Matheson and Ed Solomon—and a third disc includes the new documentaries “Time Flies When You’re Having Fun! – A Look Back at a Most Excellent Adventure” (61 minutes) and “Bill and Ted Go to Hell – Revisiting a Bogus Journey” (52 minutes), both featuring new interviews with Keanu Reeves, Alex Winter and co-writer Chris Matheson, among others.