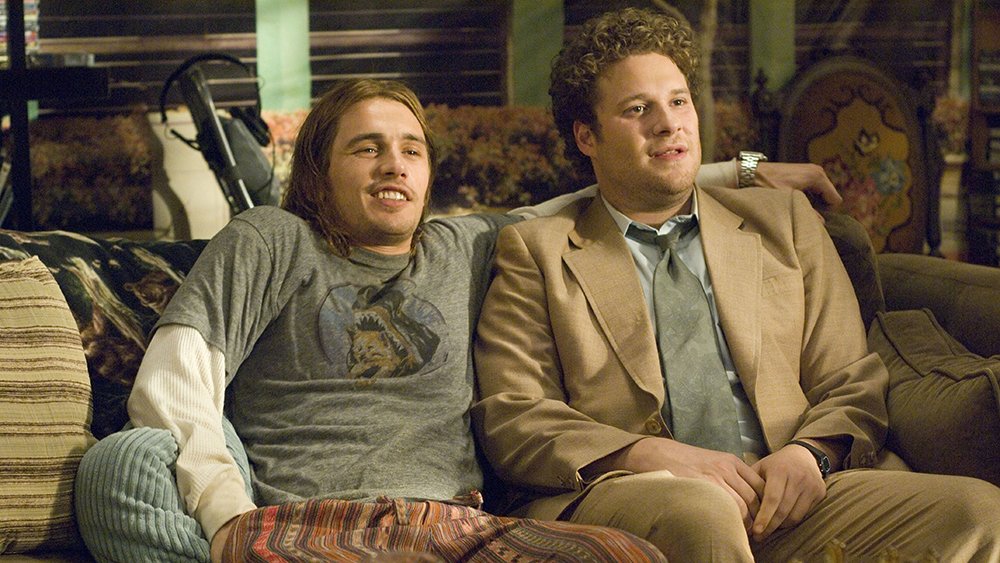 The Judd Apatow factory refreshed the coming-of-age comedy (for all ages of adolescent men) in comedies like Knocked Up, Superbad, and Forgetting Sarah Marshall before stretching itself thin (that’s my best explanation for Drillbit Taylor and Step Brothers).

One of the smartest things he did was to seek out directors not normally associated with his brand of humor and bring them on board. The sensibility of David Gordon Green, who jumped from indie dramas of small town tragedy to this stoner buddy comedy, is one of the reasons that Pineapple Express (2008) works. Not previously a director known for his sense of humor, he has a great time with the comedy while keeping his eye on the characters and the chemistry. The screenplay by Seth Rogen and Evan Goldberg (from a story co-written with producer Judd Apatow) doesn’t really take us anywhere we haven’t been before, but it gets stoner culture in a way movies haven’t really done before, and it offers an accidental buddy film that works.

Seth Rogen is wise-cracking straight man Dale, a process server who is remarkably effective despite the fact that he tokes up between assignments. James Franco flashes his wide grin of innocence and benign amiability as the sweet, stupid, emotionally ebullient Saul, the friendly neighborhood dope dealer and the exclusive distributor of the sweet new herbal strain known as Pineapple Express. They’re not exactly angels – Dale has a high school girlfriend (who is, in all likelihood, more mature than he is, but still it’s a little discomforting and a lot inappropriate) and Saul gets a group of school kids stoned – but they are sincere and admirably loyal and don’t deserve the shitstorm that comes their way when Dale inadvertently becomes witness to a cop killing and leaves a calling card at the scene of his sloppy escape (note to self: don’t drive a getaway car when baked to the gills).

It’s the “wrong man” formula, the innocent plunged into the middle of seriously bad people who hurt and kill inconvenient witnesses, except these innocents are almost perpetually stoned. Their response to any stress or threat is to toke up, which leaves them easily distracted and seriously paranoid, a serious impediment when fleeing men with guns. And it doesn’t help that Saul’s connection, Red (Danny McBride), is willing to sell out Saul to save his own skin. He does, however, manage to stumble through a crisis of guilty conscience and McBride makes his foggy moral journey quite an experience.

Not everyone gets such good parts. Gary Cole, one of the most underrated comic actors working today, has almost nothing to do as the ruthless drug lord, and Rosie Perez is all sass and no substance. There’s a whole relationship here lost in the haze of the Dale and Saul’s erratic getaway.

What keeps the film so engagingly off-balance is the mix of perfectly pitched stoner humor and the visceral punch of the genre mixing: These bad guys take no prisoners. Green shoots car chases with the careening, colliding immediacy of a seventies movie and doesn’t hold back on the violence when he unleashes a pair of hitmen on Dale and Saul and then ignites a drug war around them. Where the slapstick scuffle with double-crossing third wheel Red is painfully funny, Red’s run-in with the hitmen is just painful.

Not quite so thought out is the parallel drug cultures: the harmless stoners (though I wonder if all that driving under the influence is really all that harmless) and the predatory underworld gangs growing and distributing the marijuana. It’s a dichotomy that at least could have provided some irony, but just remains one more foggy message in a film that both embraces and ridicules their life of getting high and getting distracted.

The Blu-ray and DVD from Sony features commentary that is more like a party than a production track; you get a lot of background information, but only the funny stuff. Seth Rogen dominates – he’s the loudest and the funniest guy in the room – but practically everyone involved in the shoot drops in at one point or another. Also features “The Making of Pineapple Express” and extended and alternate scenes. The “2-Disc Unrated Edition” and the Blu-ray edition features an extended version (about six minutes longer, mostly with comic exposition), bonus deleted scenes and scenes from what appears to be an alternate universe version of the film (see “Item 9” and “Saul’s Apartment”), more featurettes, plenty of behind-the-scenes footage (including the first table read) and a digital copy of the film. These are fun, substantial supplements in the spirit of the film experience.