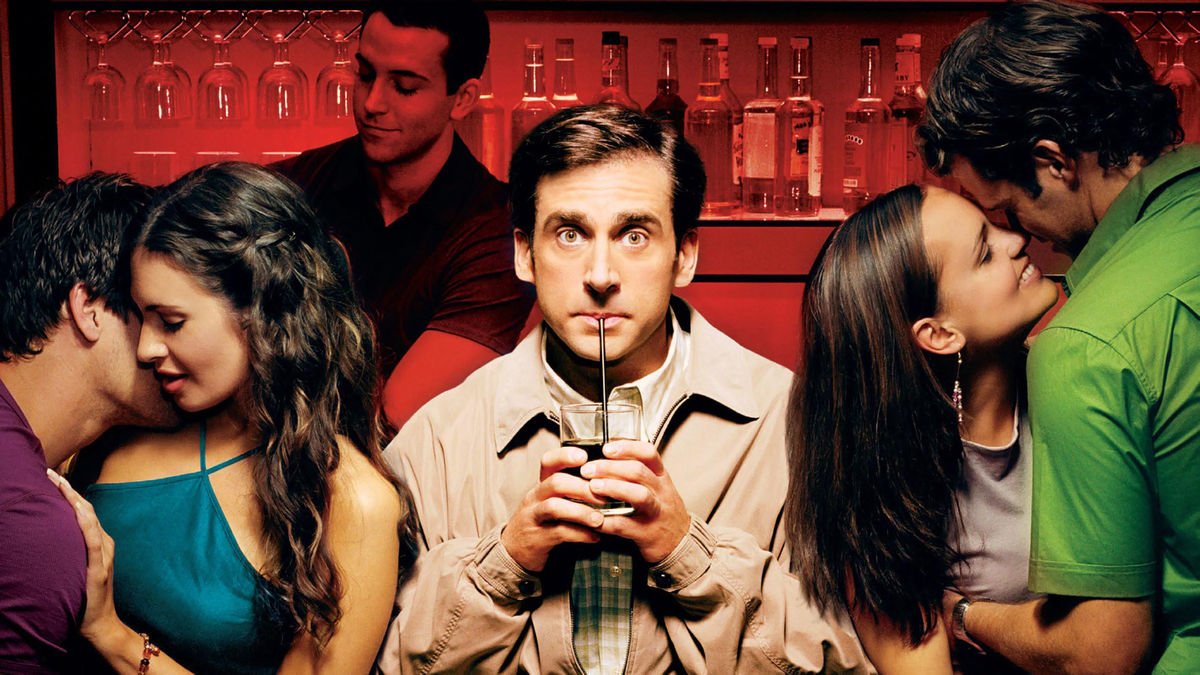 Steve Carrell is a sweet, shy middle-aged geek and the last American virgin in The 40-Year-Old Virgin (2005), the feature debut of director Judd Apatow (who wrote the film with Carrell), an oddly sweet mix of romantic comedy and adolescent shenanigans, albeit with a slightly older cast. When he’s pulled out of the stock room and onto the sales floor by his coworkers at the electronic superstore (Paul Rudd, Romany Malco and Seth Rogen), his secret comes out and his new buddies decide it’s time for that change. Catherine Keener is the offbeat, easy-going woman he meets while his buddies are busy trying to get him laid, a single mother with two adolescent kids, but he’s so nervous about his inexperience that he makes a no-sex pact for their first twenty dates. It’s his way of avoiding the pressure and fear, but it also builds up expectations that become almost too daunting to face.

Apatow’s direction is less smooth than his TV work (such as Freaks and Geeks and The Larry Sanders Show), in part because of his working methods. He encourages improvisation and embraces spontaneity, but it’s all in service to character and theme. There’s a reason that none of these men are in serious relationships and their advice is dubious at best. They are also a delight to spend time with, thanks to the mix of amiable camaraderie and juvenile joking, and Elizabeth Banks and Jane Lynch get in on the fun with their comic scenes.

Carrell made the film after a string of solid supporting roles in similar ensemble-oriented comedies but before The Office established him a small screen star and plays the role as amiable if socially awkward, with an undercurrent of melancholy in his isolation from the rest of the world. The story of how it happened—or rather, how it never happened—is related with such naked honesty that it becomes a confession of how he fell out of the stream of life and ended up in his own world of “collectibles” (to be looked at but never played with) and solo activities. The montage of his life is funny, a one-man nerd fest, yet also sad that he spends his time alone. When he starts to make connections with Keener and her kids, his commitment is honest and authentic.

The film wouldn’t be nearly as funny if we didn’t believe these characters or care about their relationships, and Apatow and his collaborators deliver on both counts. For all the sniggering humor, there’s an honesty about both the fascination and fear of sex, and the sacrifices we make for love.

, iTunes, GooglePlay and/or other services. Availability may vary by service.
The 40-Year-Old Virgin [Blu-ray]

The unrated Blu-ray and DVD releases from Universal Home Video including commentary by director/co-writer Judd Apato, actor/co-writer Steve Carell and cast members, deleted scenes (with optional commentary by director/co-writer Judd Apatow and actor/co-producer Seth Rogen), additional unused footage from the “Date-a-palooza” and “You know how I know you’re gay?” scenes (with optional commentary), a montage of alternate jokes from existing scenes, the interview featurette My dinner with Stormy (actor/co-producer Seth Rogen has dinner with adult film star Stormy Daniels), a gag reel, and a featurette on the waxing scene.