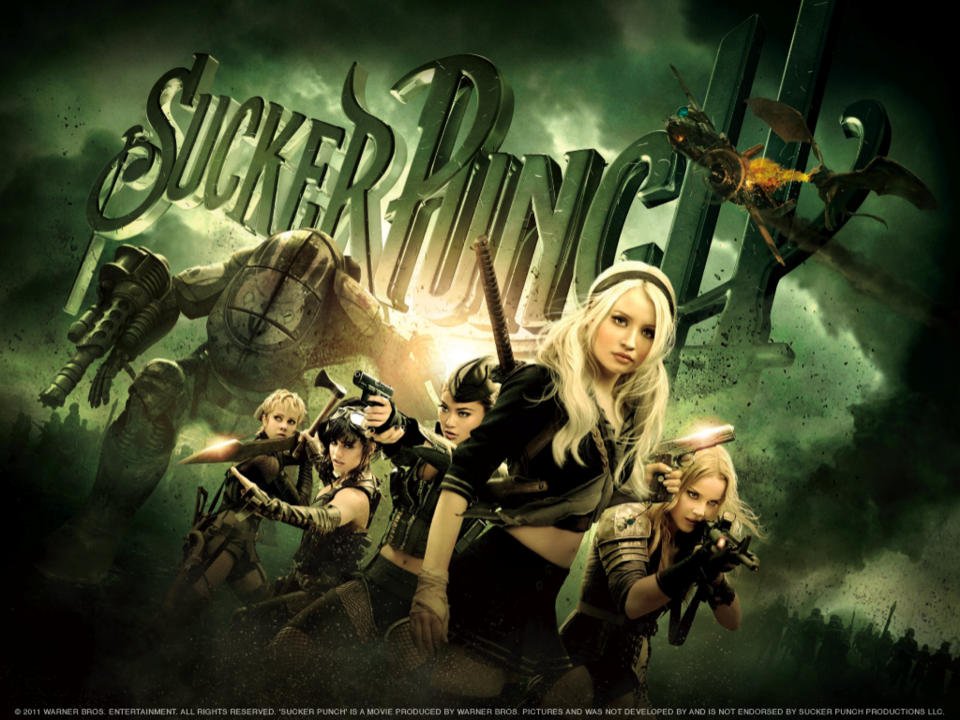 Incoherent, absurd, confused, and strangely fascinating, there is no doubt that Zack Snyder’s Sucker Punch (2011), the director’s first original script, is a mess of movie. Even the term “original” is a questionable description, as the wide range of influences define the film as much as his own pop sensibilities. Yet Sucker Punch was so critically derided that I think it’s been dismissed without really acknowledging the mad mix of inspirations or Snyder’s own blinkered passion for the project, clearly something that, for reasons he may not be able to articulate, he poured his creative energies into.

The vague mid-20th Century setting with a 19th century Gothic attitude and music-video stylings drops Baby Doll (Emily Browning) into a private sanitarium that looks like Arkham Asylum at its most soul-crushing from the Batman comics. But before we have a chance to ruminate on the orphanage horror we are plunged into her fantasy of the place as a bordello prison fronted by a gangster (the head orderly, played by Oscar Isaac who adds a pencil mustache and zoot suit for his fantasy incarnation) in the flesh trade, with the Cuckoo’s Nest of pretty young inmates (Abbie Cornish, Jena Malone, Vanessa Hudgens, and Jamie Chung) now dancers in the show.

But that’s just the first step down the rabbit hole of escapist fantasy. Under the hypnotic sways of Baby Doll’s magic moves, the girls are refashioned as jailbait stripper fantasies (all with exposed navels and a flash of thigh) and arm themselves with heavy metal artillery to take on one anachronistic video game scenario after another: a samurai rite of passage, a World War II mission against zombie Nazis, a siege on a castle of Orc-like beasts and dragons, a sci-fi odyssey against robot terrorists on a moon of Saturn. Because nothing says female empowerment than babydoll outfits and really big guns.

It’s ridiculous and often incoherent, but also oddly fun in the sheer overkill of pulp and fantasy imagery. It’s all dropped into the blender of Snyder’s mind and poured out through animated environments and monstrous armies of unreal foes they have to defeat in order to escape the asylum. It is Grimm fairy tale, Gothic thriller, twisted film noir, wacked-out madhouse melodrama, modern video game, and cheesecake spectacle framed by dime-store Freud and Jung set to pop music themes turned into tragic anthems.

Snyder doesn’t appear to have thought any of this out. He exploits and empowers his heroines in equal measure and seems unaware of the crazy contradictions of his message and the inconsistencies in his characters. Forget the obvious incongruity of Baby Doll imagining her fight for freedom in terms of movie genres and video game imagery that didn’t even exist in her era. Why would she imagine herself as an adolescent boy’s sexual fantasy? I’m not saying there’s no good reason for it—our minds are often colonized by cultural perspectives that do us no good—just that he never bothers to even suggest one.

But for all the complaints about the cartoonishness of the set pieces, there are suggestions (well, vestiges of suggestions) of girls imprisoned by cultural stereotypes and corrupt chauvinism, fighting their way out of demeaning definitions applied to them by embracing the imagery and turning it on their oppressors.

Yes, you’re right, that’s a stretch. But I think there’s at least a little of that drive under Snyder’s inarticulate expressions of rebellion. And he has compassion for the commitment of these girls and for the sacrifices they make for one another. There is tragedy and triumph wrapped together and ultimately a sense of empowerment buried under the exploitation. Mostly, though, it’s a crazy ride though Snyder’s pop culture subconscious. And if you suspend your disbelief at the mixed messages and warped metaphors, its excesses and overkill can be fun. Certainly more fun than his dour, oh-so-serious Superman movies.

Also, note Jon Hamm as the shady doctor-turned-high roller in the fantasy.

Leaves Netflix at the end of May. Add to My List on Netflix

, iTunes, GooglePlay and/or other services. Availability may vary by service.
Sucker Punch [Blu-ray]

The DVD and single-disc Blu-ray edition features four animated “prequel stories” set in the fantasy realms of the film, short pieces without much substance that were also used as promotional shorts for the film, and a very brief featurette (under four minutes) on the musical soundtrack.

An extended cut of the film, running 17 minutes longer (including a major musical number), is featured on the Blu-ray+DVD+Digital Copy three-disc set, along with the exclusive “Maximum Movie Mode” audio/video commentary track. Zack Snyder really embraces this type of interaction and steps in to deconstruct scenes and explain himself, but he’s most engaged when it comes to explaining the execution. Though his cites Joseph Campbell along the way, he never really articulates his intentions. The rest of the mode is filled with picture-in-picture behind-the-scenes footage, interviews, effects work, and storyboards.