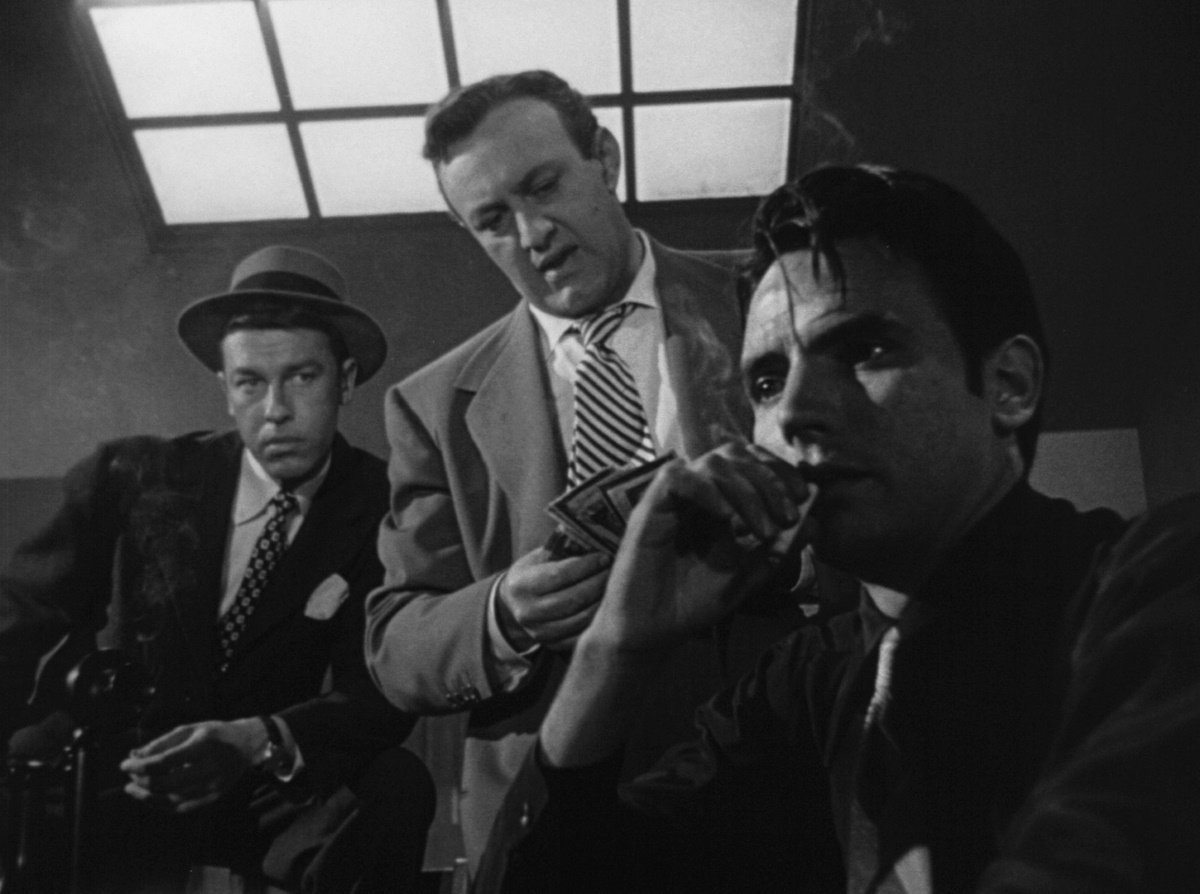 Lee J. Cobb takes the lead as Lt. Ed Cullen, a veteran Homicide Detective in a secret affair with socialite Lois Frazer (Jane Wyatt) while she’s in the midst of a divorce, in The Man Who Cheated Himself (1950).

Things get complicated when she shoots her soon-to-be-ex-husband (in self-defense) and Ed looks over the incriminating evidence and decides that a cover-up is in her best interest. When he’s assigned the case, all looks good, except that his rookie partner—his newlywed and newly promoted younger brother Andy (John Dall)—digs into the evidence and uncovers contradictions in the case, despite Ed’s efforts to nudge him in other directions.

It’s a classic good cop gone bad set-up but Ed isn’t greedy or corrupt, merely protective of the woman he loves, which gets complicated because he’s equally protective of his kid brother determined to pull at every loose thread. Wyatt is an unlikely femme fatale, less cold-blooded than practical, and Cobb is excellent as the tough mug of a cop swayed by love. The two deliver a beautifully understated coda that sums up their relationship without a word, merely glances and body language that suggests a tenderness that still exists between them. Dall is the opposite as the bright and energetic rookie on the trail of his first big case, with wide grins and a twinkle in his eye.

Director Felix Feist, a noir veteran, directs this independently-made film noir shot on location in San Francisco with brisk efficiency, moving it along its paces and taking the camera out of the studio and into the city. The imagery is more low-key than the classic noir style until the finale, where Ed and Lois hide out in Fort Point on the Presidio in the shadow of the Golden Gate Bridge (years before Vertigo made it an iconic San Francisco location).

Feist makes superb use of the space: the open courtyard, the architecture of arches and open bays, the echoing footsteps through the brick hallways enhancing the ghostly emptiness and cat-and-mouse tension. It gives the film a vivid atmosphere and visual eye unseen in the first two acts of the film.

The film fell into the public domain and has been available in poor quality editions for decades. It was restored by the Film Noir Foundation and UCLA Film and Television Archive in 2018. We only list high quality editions at Stream On Demand.

Kanopy features the Film Noir Foundation restoration of the film.

Add to My List on Kanopy, which streams free on most public and college library systems.

Also on Blu-ray and DVD and on SVOD through Amazon Video, iTunes, GooglePlay, Vudu and/or other services. Availability may vary by service.
The Man Who Cheated Himself [Blu-ray + DVD]

Unavailable for years in anything but substandard editions, it made its makes its Blu-ray debut in a dual format edition featuring a new restoration from the Film Noir Foundation and UCLA. The Blu-ray / DVD combo release includes featurettes on the restoration and the locations and the restored original trailer on both discs.