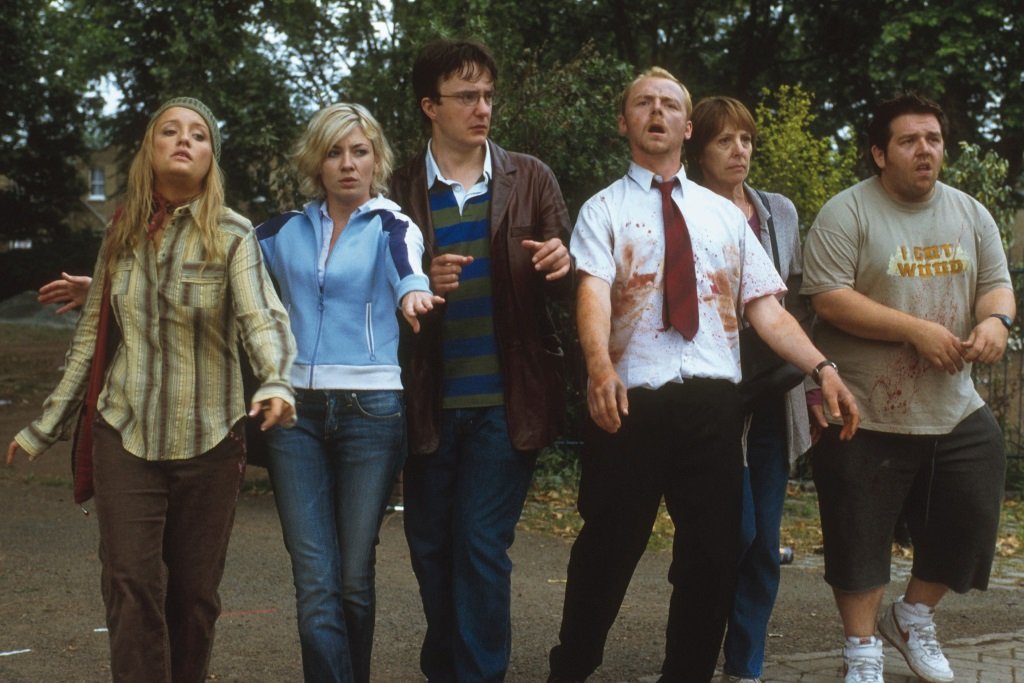 The apocalyptic hysteria of the zombie film has always been pitched on the edge of comedy: a horrible black joke played on humanity by a god with a sick sense of humor. Director/co-writer Edgar Wright and co-writer/star Simon Pegg’s self-proclaimed “rom-zom-com” (romantic zombie comedy) Shaun of the Dead (2004) simply nudges it over the edge.

Image a Brit-com reworking of George Romero’s Dead trilogy. Shaun (co-writer Simon Pegg), a twentysomething white collar nowhere man, is happily inert in a life of comfortable non-existence and non-commitment, much to the dismay of his long-suffering girlfriend (Kate Ashfield) and the delight of his slovenly best mate (Nick Frost). It takes the end of civilization as we know it to rouse a rudderless slacker into action… as soon as he shakes off his hangover and notices that his street is a war zone filled with groaning flesh eating zombies.

Part deadpan farce—the survivors are downright unfazed at the sight of the shuffling undead—and part bloody slapstick spectacle, it isn’t a spoof so much as an ingenious twist on a familiar genre, right down to an inspired coda that answers all the questions left open in every previous zombie apocalypse: what happens next? The priceless solution is as inevitable as it is hilarious.

Wright directs with an eye for understatement, mining deadpan comedy from a dwindling band of survivors constantly on the verge of hysteria, but also registering every loss with genuine empathy and gravity. He gives you reason to care through the laughs. In the argot of the film, it’s bloody brilliant.

It’s also the first film in the “Three Flavours Cornetto Trilogy” from director/co-writer Edgar Wright and co-writer/star Simon Pegg (Hot Fuzz and The World’s End are the second and third).

, iTunes, GooglePlay and/or other services. Availability may vary by service.
Shaun of the Dead [Blu-ray]

Shaun of the Dead [DVD]

On Blu-ray and DVD from Universal Home Video with two commentary tracks (one by director/co-writer Edgar Wright and star/co-writer Simon Pegg, the other by Pegg and fellow actor Nick Frost, Dylan Moran, Kate Ashfield, and Lucy Davis), 15 extended scenes (with optional commentary by Wright and Pegg), outtakes, a clip of the “clean” version of a foul-mouthed scene, and three very funny “explanation to three plot-holes (aka “Missing Bits”), casting tapes, Simon Pegg’s video diary, Edgar & Simon’s flip chart, special effects comparisons, make-up tests, and a promotional featurette (aka “Raw Meat”), an interview with the band Coldplay, music videos, and zombie game-show footage (aka “TV Bits,” galleries of stills, posters, and the comic book adaptation “Zombie Gallery”), and the trailer.