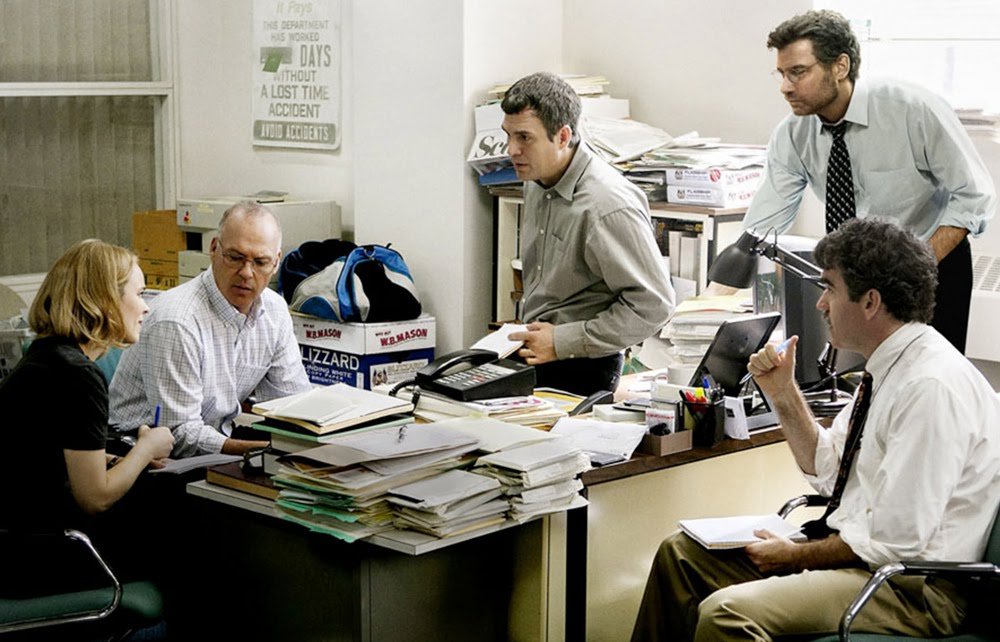 Winner of the Academy Awards for Best Best Picture and Best Original Screenplay, as well as Best Ensemble Cast by the Screen Actors Guild, Best Screenplay by the Writer’s Guild of America, Best Picture by the American Film Institute, and scores of other awards from professional and critics organizations, Spotlight (2015) is the kind of film that takes on the Big Subject with modesty and self-reflection, drawing the viewer into the world of the reporters and culture of Boston in 2001 to better understand the scope of everything that’s at stake.

Spotlight is the story of the Boston Globe reporters who investigated history of abuse perpetrated on children by Catholic priests, a history that had spotty coverage in the paper over the years but was each time quickly forgotten, chalked up as another isolated case. It takes new editor Marty Barron (Liev Schreiber), someone from out of town who hasn’t grown up believing The Church an untouchable institution, to spur a serious look into what turns out to be a systemic issue. He assigns the paper’s investigative “Spotlight” unit—reporters Michael Rezendes (Mark Ruffalo), Sacha Pfeiffer (Rachel McAdams), and Matty Carroll (Brian d’Arcy James), and editor Walter “Robby” Robinson (Michael Keaton)—not all of whom are convinced there’s a story here. Until they see a startling pattern.

I say it’s the story of the reporters but we actually see little of their lives outside of their work. Their job is their life and the focus of the film, the long, thankless slog of interviewing scores of people, following up leads, challenging officials, checking sources, double-checking facts, and pulling together the hundreds of pieces to lock in a story that challenges perhaps the most powerful and beloved institution in their city. In that sense it’s an old-school newspaper drama in the 21st century and director/co-writer Tom McCarthy, who researched and wrote the script with Josh Singer, brings those details to life.

McCarthy, whose earlier films The Station Agent and Win Win are affectionate character pieces, is what you might call an actor’s director. He loves performers and characters and creates space for the personalities to fill the screen and collide, kibbitz, and collaborate with one another. Two members of the cast, Ruffalo and McAdams, received Oscar nominations, but Keaton is equally deserving and the ensemble is so good—it’s a team effort about a team effort—that you wish the Oscars had a category to reward it.

The city is just as much a character in this drama as the people. The Catholic Church looms large in Boston, not just symbolically but literally, as McCarthy reminds us with every city street scene. There’s hardly a shot that doesn’t have a church looking on like a sentinel and McCarthy is astute enough not to hammer the idea home. He simply allows the images linger.

The events are now over a decade old—the first story was published in early 2002—but the aftershocks still reverberate through the country and all over the world. McCarthy and his team show us why the truth was hidden for so long, how it was finally brought into the light, and why journalism—real investigative reporting, which is more rare all the time in a culture of struggling newspapers and click-bait web headlines masquerading as news—matters. Along the way, they tell one hell of a story.

The DVD and Blu-ray editions include two featurettes and a brief roundtable discussion with the real-life Globe reporters dramatized in the film.