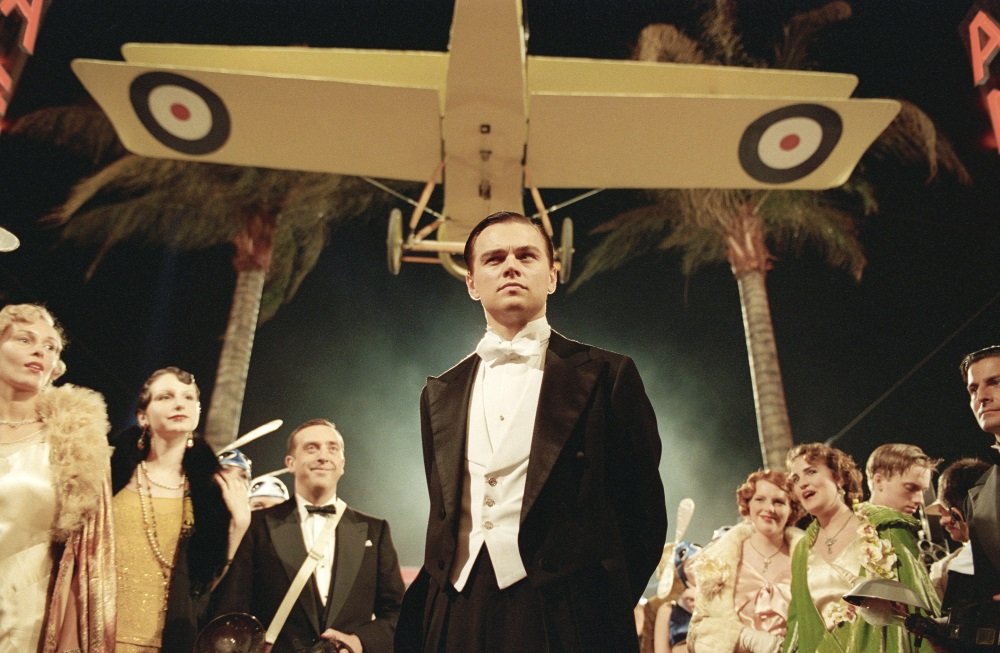 The Aviator (2004), Martin Scorsese’s epic biography of the life of Howard Hughes, is his love-letter to the old-Hollywood bio-pic. This is high-style filmmaking wrapped up in a tormented hero whose soaring flights of greatness are matched by the mortal pull of his devils, which Scorsese establishes (perhaps too patly) in a childhood prologue bathed in golden light and visual decadence that recalls Luchino Visconti more than Josef von Sternberg. From there it’s all high-powered Hughes, played with cocky confidence but social awkwardness by Leonardo DiCaprio in a film that anticipates the lavish look and style of The Great Gatsby.

Scorsese take us from the late 1920s, when Hughes sets out to take Hollywood by storm with the most expensive movie ever made to that time (the aviation war epic Hell’s Angels), to the late 1940s, when he pulls himself out of an almost crushing depression to take on congress and fly the experimental Spruce Goose (the largest plane made to that time) in its maiden—and only—voyage. In between is a turbulent romance with Katherine Hepburn (Cate Blanchett in a glowing spitfire of an impression/incarnation), a tempestuous affair with Ava Gardner (Kate Beckinsale, somewhat soggy in the role), and a ferocious battle for dominance of the airline industry with Pan American tycoon Juan Trippe (Alec Baldwin).

Scorsese’s gift for creating thrilling moments of cinema (the crash of an experimental plane in downtown Los Angeles is breathtaking) and he has the good fortune of a structure in John Logan’s screenplay, but he’s more caught up in texture of the impeccably recreated world and the flourishes of the wild life than in exploring the flawed man behind the legend. John C. Reilly co-stars as Hughes’ loyal company man and Alan Alda is perfectly unctuous as a bought-and-paid-for Senator who tries to crucify Hughes in a Senate investigation.

, iTunes, GooglePlay and/or other services. Availability may vary by service.
The Aviator [Blu-ray]

The Blu-ray and DVD releases feature commentary by director Martin Scorsese, film editor Thelma Schoonmaker, and producer Michael Mann (recorded separately), a deleted scene (Howard Tells Ava About His Car Accident), and a vault of featurettes: the 11-minute overview “A Life Without Limits: The Making of The Aviator, ” the historical featurettes “The Role of Howard Hughes in Aviation History” and the 44-minute “Modern Marvels: Howard Hughes” (the latter originally made for the History Channel), the informational “The Affliction of Howard Hughes: Obsessive-Compulsive Disorder, the production featurettes “The Visual Effects of The Aviator,” “The Affliction of Howard Hughes: Obsessive Compulsive Disorder,” “The Age of Glamour: The Hair And Makeup of The Aviator,” “Costuming The Aviator: The Work of Sandy Powell,” “Constructing The Aviator: The Work of Dante Ferretti,” and “Scoring The Aviator: The Work Of Howard Shore,” the interview featurettes “An Evening with Leonardo DiCaprio and Alan Alda” (a 28-minute piece moderated by David Schwartz) and “OCD Panel Discussion With Leonardo DiCaprio, Martin Scorsese, and Howard Hughes’ Widow Terry Moore” (discussing Hughes’ obsessive-compulsive disorder), the short portrait “The Wainwright Family – Loudon, Rufus and Martha,” and a still gallery.